What does Florida man mean?

Where does Florida man come from? 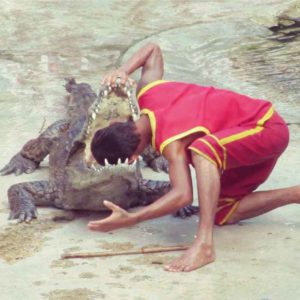 There must be something in the water. When it comes to weirdness, Florida is king, as has long been the running joke. As early as 1995 in internet Usenet groups, fans of Chuck Shepherd’s newspaper column “News of the Weird,” which started in 1988, noticed that many of his strangest tales seemed to come from Florida newspapers.

In 1998, Florida journalist Eliot Kleinberg published a book, Weird Florida, that chronicled some of the oddest stories he ever had to report on. By the early 2000s, Florida was a well-established butt of the joke.

In May 2012, the phrase Florida man saw a spike in Google searches after Miami police shot a man from Florida (or Florida man), Rudy Eugene, who was attempting to eat another person’s face.

So, why Florida man? In journalism, it is common practice to use a generic descriptor for a criminal suspect if the specific name of the criminal is unimportant or not released by police. In Eugene’s case, he was a male resident of the state of Florida, i.e., Florida man, as he was reported around the world.

Like I always say, when a news story begins "Florida man…" get a drink and settle in for some first-class reading entertainment.

In February 2013, Florida man earned his own subreddit, which compiles stranger-than-fiction crimes in Florida.

Who will write a theme song for the world's newest and greatest superhero, Florida Man? https://t.co/fZQiYSdF

But, why Florida? It might come down to accessibility. As the Miami New Times has noted in 2015, Florida has long ensured government records, including police reports, are public. This means that on a slow news day, it is easy for a media outlet to search through Florida police reports for an attention-getting story. 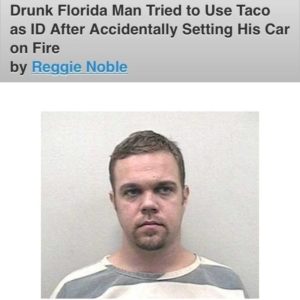 Whenever a bizarre crime is committed, especially in Florida, people are quick to joke that it was the work of Florida man.

Florida Man back on his bullsht pic.twitter.com/aGhdM2lFmi

Sometimes when I'm bored I look up what Florida Man has been up to this week. pic.twitter.com/tK2ICW3XWQ

@_FloridaMan continues to chronicle the strange antics of Florida man too.

So, in other news, Florida Man was arrested for recording himself having sex with his dog.

This is not meant to be a formal definition of Florida man like most terms we define on Dictionary.com, but is rather an informal word summary that hopefully touches upon the key aspects of the meaning and usage of Florida man that will help our users expand their word mastery.