or got ‘em or gotem [gawt uhm]

What does got em mean?

Often used in conjunction with memes, got em is a phrase said in triumph after successfully tricking someone, pulling off a prank, or making a joke at someone else’s expense.

Where does got em come from? 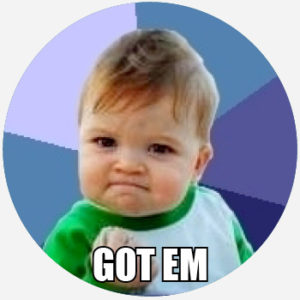 As an interjection refrain popularly used in response to a prank, got em can be found online since at least 2004. It was popularized online by the deez-nuts meme. This meme originated from a video created by Instagram user WelvenDaGreat.

The video was originally posted on March 20, 2015 on Instagram, which led to a dramatic increase in online queries for got em. In the video, WelvanDaGreat is on the phone with a friend, to whom he says that they got “something in the mail today.” After a pause, the friend asks “What?”, to which the response was “deez nuts.” After delivering the punchline, WelvenDaGreat laughs and hoots “Got em!”

However, since at least the 1400s, to get a person has meant to “capture” them, broadening over the centuries to “make them fall for a trick.” ‘Em has been a colloquial pronoun for them or him since Old English.

Examples of got em

Who uses got em?

In casual speech and on social media, got em is used by pranksters and jokers as a kind of taunting punchline. It’s usually said after someone tricks or makes fun of another person. However, the most recent, popular iteration of the phrase is used in conjunction with a variation of the deez-nuts meme.

Outside of the deez-nuts meme, got em is associated with the Circle Game. This involves goading someone into looking at an OK-like hand gesture held below the waist. If the person looks at the gesture, the player will say “got em” and punch the other person. The phrase is also increasingly popular among sneakerheads, who post pictures of their new acquisitions with an accompanying “gotem” caption or hashtag. A notable exception to the typical user is the Fullerton PD Twitter account, which hashtags pursuits and arrests with “#gotem” and “#winning.”

This is not meant to be a formal definition of got em like most terms we define on Dictionary.com, but is rather an informal word summary that hopefully touches upon the key aspects of the meaning and usage of got em that will help our users expand their word mastery.