Feedback
no face, no case
no mames

What does no homo mean?

No homo is an extremely offensive, anti-gay expression. Some heterosexual men say no homo to emphasize their sexual orientation after saying something complimentary, affectionate, or otherwise positive to another man that they worry could be interpreted as romantic or sexual.

The homo in no homo is an extremely offensive slang shortening for homosexual.

Where does no homo come from? 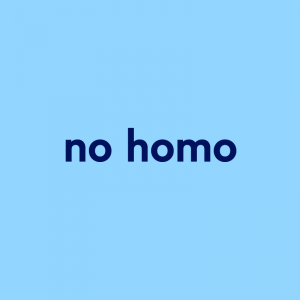 In the 1990s, no homo was used in hip-hop as a preemptive measure. That is, when a male rapper wrote a lyric that he thought could be perceived as romantic toward other men, he might add no homo to the line to head off any slurs routinely slung at gay men. Homo, shortened from homosexual, has insulted men as “weak” since the 1960s.

Please note: the word gay (which itself has its own painful past) is now recommended over homosexual to refer to gay men. Learn why in our new words update, “Dictionary.com Releases Its Biggest Update Ever.”

After entering the casual speech of young, cishet men, no homo burst onto the internet scene in 2003 with multiple definitions on Urban Dictionary. Most of these definitions and usage follow the same line of reasoning as the original meaning—homophobically thwarting any taunts that a man is “gay” because he complimented another guy. Sometimes no homo is added in this way in case a statement gets misinterpreted as homoerotic innuendo, e.g. I’m gonna drill his ass when he gets back. No homo.

The phrase no homo came to prominence in June 2013 when Indiana Pacers player Roy Hibbert was fined $75,000 for saying no homo in a post-game press conference. LeBron James also issued a no homo in 2010, though he wasn’t fined.

Examples of no homo

Upon entering the City of Brotherly Love, Mike Pence mopped his sweaty brow and muttered, "No homo." #PenceInPhilly
@JonasLeft, July 23, 2018
For a series that preaches inclusion and acceptance, J.K. Rowling does a bad job of practicing it in her writing. ... Why the fuck is Dumbledore’s sexuality still not being “explicitly” addressed? ... This, mind you, comes after fans watched Albus and Scorpius in The Cursed Child get quiiiiiite close to each other only to get no-homo’d at the very end.
Andrew Sims, Hypable, January 31, 2018
I LOVE THAT YOUR FRAGILE MASCULINITY HAD TO MAKE YOU SAY “no homo” THATS SO FUNNY IM SCREAMING WJDNWNXBA
@Giulian29726217, September 8, 2020
SEE MORE EXAMPLES

Who uses no homo?

The original, disparaging sense of no homo is still in use. The phrase’s roots are still firmly planted in anti-gay sentiment in attempting to deflect any association with gayness, no matter how much of a stretch the denial is.

Heterosexual men often add no homo to a compliment they give to another man instead of using it to preempt a hypothetical attack based on some positive comment.  The implication that any hint of gayness has to be nipped in the bud is rooted in the mindset that being gay is bad, wrong, or abnormal in some way.

Sometimes, gay people will use no homo with obviously gay messages. Users in these cases are directly acting to reclaim the phrase by making it seem meaningless and ridiculous. The online gay community has occasionally adopted the phrase no hetero as a label, flipping the phrase to call attention to how offensive and senseless no homo is.

Though men tend to use no homo more often than women, women do use the phrase as well. Syntactically, no homo is often just used on its own as a fragment or short interjection within a thought. Sometimes, the longer phrase no homo, tho(ugh) is used.

This is not meant to be a formal definition of no homo like most terms we define on Dictionary.com, but is rather an informal word summary that hopefully touches upon the key aspects of the meaning and usage of no homo that will help our users expand their word mastery.