What does reindeer games mean?

Reindeer games is a colloquial expression generally used for the bullying activities of a clique or for festivities around the Christmas season.

Where does reindeer games come from? 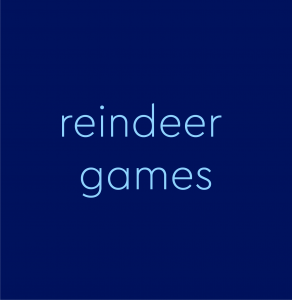 As the oft-told story goes, the character of Rudolph the Red-Nosed Reindeer was introduced by writer Robert May in 1939 for books the department store Montgomery Ward gave to children during Christmas. May’s brother-in-law, songwriter Johnny Marks, later composed music and lyrics for a song based on May’s story of Rudolph, who is ostracized by Santa’s other reindeer because of his red nose.

The song includes the lyrics: “All of the other reindeer / Used to laugh and call him names / They never let poor Rudolph / Join in any reindeer games.” The song was released in 1949, with a version by singer Gene Autry going #1 on the charts that Christmas and selling two million copies just that year. The character and story have become part of popular Christmas culture and the song, in its many subsequent renditions, a holiday staple.

As early as the 1960s, lesson plans suggest Christmas-themed reindeer games children can play, referencing the song. These games, while allusive, are fun-spirited, whereas the phrase reindeer games took on a snarkier tone in mainstream culture as a term for the cruel or bullying actions popular in-groups used to exclude outsiders.

The 1988 dark comedy Heathers notably features such a use of reindeer games when a snooty clique leader (Kim Walker) delivers a threat to an unruly follower (Winona Ryder) to change high schools: “Transfer to Washington. Transfer to Jefferson. No one at Westerburg is going to let you play their reindeer games.”

Reindeer games also supplied the title of a 2000 thriller starring Ben Affleck and Charlize Theron. Set during Christmas, Reindeer Games is about a complex casino heist (the robbers dress up in Santa Claus suits) and the various manipulative “games,” or deceptions, they end up having to play to pull it off. Reindeer games, here, is used ironically for Christmas-set scheming.

I’m selfish with my time. You cut off as soon as I feel like my time wasted. I am not for the reindeer games

@RicoRuffino, November 18, 2020
So when liberals start telling us we should freak out and abandon a Republican who’s laying down the smack on Obama’s legacy because he used to indulge in his own reindeer games, well, that’s just not happening.
‏Kurt Schlichter, Townhall, March 15, 2018
Apparently the reindeer games are played in a domed stadium, lest Donner and Blitzen’s precious coats have to adjust to imperfect conditions. Here’s hoping there are also some camel-humped reindeer languishing up there, too, just in case the holiday ever happens during a drought. Because God forbid the popular caribou bring bottled water with them.
Michael Schaffer, The New Republic, December 17, 2013
SEE MORE EXAMPLES

Reindeer games is occasionally used in speech and writing as a colorful, allusive, and usually colloquial way of describing group activities that unfairly discriminate against participants. The phrase often has a sarcastic and defensive tone, writing off such activities as childish: “Go ahead and play your reindeer games!” or “If they’re just going to be mean, leave them to their reindeer games.”

The one thing y'all are really going to learn about me is that I'm not going to let anyone play reindeer games with my time and money.

In school settings or during Christmastime, reindeer games is often used as a pun for a clever name for Christmas-based festivities.

K-5th grade Kids Ministry & friends are invited for dinner and reindeer games on December 3 at our Champaign Location while parents have an evening to start Christmas shopping, enjoy a date night, or just some quiet time without the kids. Sign up at https://t.co/8L7fikDSbm pic.twitter.com/weTMSWdUaJ

Reindeer games can be more adult, too (e.g., so, whaddya say we head back to my place for some reindeer games?).

This is not meant to be a formal definition of reindeer games like most terms we define on Dictionary.com, but is rather an informal word summary that hopefully touches upon the key aspects of the meaning and usage of reindeer games that will help our users expand their word mastery.