What does run train mean?

To run train (or run a train) refers to when multiple men have sex with a woman one after the other, with or without consent. Outside of sex, to run train on something can mean “to dominate” it, as in a sporting event or video game, or to do something energetically and thoroughly, as in to run train on an exam.

Where does run train come from? 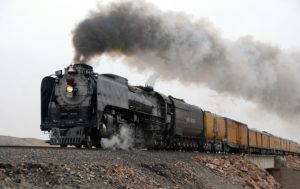 As early as 1949, train was used to refer to group sex involving one woman and multiple men who had sex with her in sequence. Pulling a train typically meant submitting a woman to this treatment without her consent, a form of gang rape. In this vulgar metaphor, according to Green’s Dictionary of Slang, the woman is the “engine” and the men the “rolling stock,” or cars of the train.

I wonder if she holds him blameless for drugging her and watching groups of men run train on her.

By the 1970s, the expression had become run a/the train on someone and can be consensual. By the 1980s, to run/pull a double train was, in black slang, when two men had sex with a woman at the same time. By 2003, when Urban Dictionary first entered the slang, the article (a/the) had fallen out, yielding run train.

Run train has other, less overtly sexual meanings. Attested at least by 2009, to run train on your competition, especially in a game, is to “overpower” or “steamroll” them. This sense may well derive, however, from the power dynamics of gang rape.

Dallas is going to run train on the SW division next year :( https://t.co/Ltpu2oljB8

The expression run train came into the spotlight in January 2019 when popular and newly elected congressional representative Alexandria Ocasio-Cortez used it in an interview with Washington Post reporter Elise Viebeck. Commenting on a fake nude picture posted of her, Ocasio-Cortez said:

Ocasio-Cortez’s use of run train raised the ire of some, especially those on the right, who accused her of using lewd, insensitive language. In the case of her example, however, “to run train on” the progressive agenda clearly means “to advance” or “conquer” it.

Yesterday @AOC said she will “run train” on the Progressive agenda

I assume she didn’t mean this and was joking, however if a Republican dared say this even kiddingly they would be forced to resign

Bout to run train on this #Chipotle 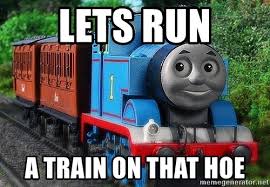 As the Ocasio-Cortez episode reveals, run train can be a problematic expression. On the one hand, we see it evolving as a vivid, non-sexual way to express domination, such as in the sports, or in video games like Call of Duty.

@OpTic_DKarma Looking forward to seeing you run train at COD XP. Btw, you only had a 13.30 k/d. Hope to play again. pic.twitter.com/ycZKGZB6cC

Browns bout to run train in the AFC

This sense appears to be further expanding to “screwing over” or, well, “fucking over” someone.

You got to love South Africa… no matter how many time our government run train on us we keep voting them back into power. I say we deserve exactly what we voted for… but this time the middle class minorities ain't gonna pick up the bill!!! #taxrevolt

As evidenced in Ocasio-Cortez’s use of the term, run train can also be used synonymously with another idiomatic phrase, to “go to town on” something, or to do something thoroughly and energetically.

About to run train on the Weyburn KFC buffet. I should leave room for Thanksgiving dinner tonight…..but I won't.

I can't ever just listen to one song on this damn album. Always gotta run train on it!

On the other hand, run train has a sexual history associated with rape. Run train still sees use in sexual contexts. Men may crassly use run train in suggesting they will sexually dominate a woman. Various pornographic content may reference run train for consensual group sex, though it’s hard to rule out rape fantasies there.

This is not meant to be a formal definition of run train like most terms we define on Dictionary.com, but is rather an informal word summary that hopefully touches upon the key aspects of the meaning and usage of run train that will help our users expand their word mastery.