Sadcited describes the feeling of being sad and excited at the same time, especially at the transition from an ending to a beginning.

Where does sadcited come from? 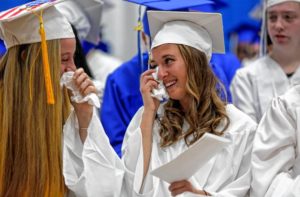 Life is full of mixed emotions—and mixed words. That’s where sadcited comes in. Sadcited is a blend of sad and excited, used especially of feeling sad when one thing is ending but excited that another is beginning.

The earliest instance of sadcited is unclear, but it appeared on Twitter by 2008 as a nonce coinage. Many other people since (and likely before) independently coined sadcited.

still full of cold but last class this evening. Kind of sad and excited! Sadcited!

Actor Josh McDermitt, who plays the character Eugene on the zombie drama The Walking Dead, notably said he felt sadcited about the departure of fellow actor Lennie James, who was leaving the show for its spinoff, Fear the Walking Dead.

Said goodbye to some wonderful friends today @CravenPrimary Endings can be tough. But there's always a beginning after an end. 😀 #sadcited
@ScottishSteve_, June, 2017
Last day in my current job! Feeling sad but excited for a career change 💜 I'm totally sadcited today 😢😁 #FridayFeeling
@Scrumanatrix, September, 2017
She told the students that they had a new janitor, that Mr. Cunha had moved on to a new role in charge of all custodial services in the public schools. “We are sadcited,” said Ms. Hartley-Matteson ...
Beth David, Fairhaven Neighborhood News, August, 2017
SEE MORE EXAMPLES

Sadcited is often used in the context of endings and beginnings (e.g., I’m so happy to be moving but I wish I didn’t have to leave my family. Definitely sadcited.) Bittersweet is an effective synonym for the word.

It can also be used for situations that are a double-edged sword, when something bad spurs on something good.

Sad as I am about the Conan situation (tv-stuff sad, not real-life sad), it has made for some great television. I'm sadcited for Friday.

The hashtag “#sadcited” is used by people sharing their sadcitement, such as when a colleague moves on to a new job or when a school year comes to an end.

This is not meant to be a formal definition of sadcited like most terms we define on Dictionary.com, but is rather an informal word summary that hopefully touches upon the key aspects of the meaning and usage of sadcited that will help our users expand their word mastery.