What does smize mean?

To smize is to smile with your eyes, usually in a sexy and playful way. Fierce!

Where does smize come from? 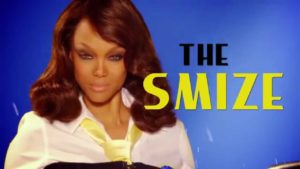 Smize is a “Tyraism” of Tyra Banks, former model and host of America’s Next Top Model. According to Banks, to smize is to “smile with your eyes,” blending the word smile with the sound of the word eyes, hence the spelling smize.

The word and act were the main focus of “Fortress of Fierceness,” the third episode of Season 13 of America’s Next Top Model, which aired on September 16, 2009. In the episode, Banks taught the contestants what smizing was, with the competitive challenge centering on performing the best smize. As for what a smize looks like, Tyra has famously demonstrated it on various talkshow appearances and interviews.

Sure enough, smize first appeared online a few days before the premiere of the 13th season of America’s Next Top Model, likely because clips of “Fortress of Fierceness” were used in commercials and marketing.

@tyrabanks you taught me how to smize! Now can you teach me how to become a Disney star? :) girlll H2T you got it alll!

Tyra herself first tweeted the word immediately after “Fortress of Fierceness” aired.

did u c ANTM last night? Have u learned the art of the SMIZE???

Good morning. Now get out there and SMIZE at a stranger!
@tyrabanks, August, 2018

For all the purists out there, it looks as though Life-Size 2 will hold tight to the lore of the first film. In the sequel, Eve swishes down liquid butter and smizes her way through a makeover montage. 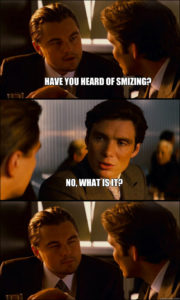 Tyra Banks remains a huge fan of her smize. Plenty of smizes (in word and facial form) can be found on her social media.

Someone just asked me if my Smize is so powerful I can look into the eclipse without those special glasses thingies.

Since Tyra popularized the word, an untold number of other people have captured smizes from women, men, and even animals.

my fave shot UGH the outfit, the smize, the posing, those kissable lips!!

This is not meant to be a formal definition of smize like most terms we define on Dictionary.com, but is rather an informal word summary that hopefully touches upon the key aspects of the meaning and usage of smize that will help our users expand their word mastery.