What does sucking dick mean?

Sucking dick is a vulgar slang term for performing oral sex on a man. Telling someone to suck a dick is a strong insult meaning “Screw you!” If something (e.g., work, a song) sucks dick, it’s “very bad.”

Where does sucking dick come from? 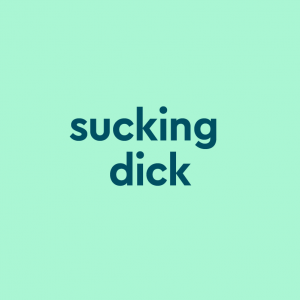 The word dick has been a slang term for a man or fellow since the 16th century. It is likely that its meaning expanded (pardon the pun) to “penis” in the mid-19th century—at least as recorded, as it was certainly spoken well before then.

So, did, popular culture. On Drake’s 2010 song “Fancy,” T.I. raps: “They get a baller, think that they ain’t got to pick a career / Guess they plan on sucking dicks until some millions appear / Like ‘voilà!’ You do it right he might just buy you a car.”

In the 2014 comedy Tammy starring Melissa McCarthy, Tammy mouths off to her boss when he is sharing the secret to his success: “Sucking dick and kissing ass?”

In the 1930s, sucking (someone’s) dick was slang for “flattering someone,” but it went on to become an insult equivalent to telling someone “to fuck off.” While saying suck my dick had usually been a coarse insult issued by men, women began increasingly using the phrase in the 2000s—it can pack a real gender-empowered and ironic punch.

Similar to telling someone to go and, oh, suck a bag of dicks, when something sucks dick, it’s undesirable or objectionable. Homework, parking tickets, hangovers—all these could be said to suck dick. Presumably, the sweary analogy is that sucking dick is not something everyone necessarily wants to do, perhaps a sense originating with a homophobic subtext.

My "how are you?" ban has little to do with a curmudgeonly aversion to social niceties, although that's a small part of it. (Much like Larry David, I'm also opposed to singing "Happy Birthday" — not for philosophical reasons, but mostly because it's a dumb song that sucks dick.)
EJ Dickson, Mic, August 25, 2015
WHEW, sometimes you've just gotta holler "suck my dick, typos!" and keep it moving.
@theferocity, January 7, 2020
lol this does not mean men can make dick sucking jokes @ me fuck off
@mariasherm, November 8, 2016
SEE MORE EXAMPLES

First off, sucking dick: it’s not a phrase, in any of its senses, you want to use around your grandma or kids eating Happy Meals.

As a dismissive insult, suck my dick is concise, forceful, and by no means limited to sexual topics.

If you are against pit bulls you can unfollow me and suck my dick.

This is not meant to be a formal definition of sucking dick like most terms we define on Dictionary.com, but is rather an informal word summary that hopefully touches upon the key aspects of the meaning and usage of sucking dick that will help our users expand their word mastery.