or t-pose or reference pose [tee-pohz]

What does T-pose mean?

T-pose refers to a default pose in video games where an animated character stands with their arms horizontally outstretched. The image became an absurdist meme in 2016.

Where does T-pose come from? 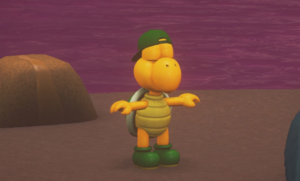 The term T-pose, also called a reference pose, is used in the 3D animation and video game industry. For ease of coding and editing, programmers commonly hold characters in a default t-pose, with their arms outstretched horizontally in the shape of the letter T.

This position is like a blueprint, allowing animators to add more complex facial and clothing later in design.

Usually, the T-pose does not make it into the actual game, but occasionally glitches occur, causing characters to randomly snap into this pose. These glitches inspired the T-pose meme. It began in 2010 but spread in 2016 as a so-called deep-fried memes, which variously feature highly contrasted images with grainy filters, glowing eyes, and emoji.

In 2017, the subreddit r/TPoseMemes was created and by the end of 2018 had 13,000 subscribers. Memes were made of various characters from TV and video games.

One of the most pervasive and popular meme images, though, was called T-Pose to Assert Dominance, a fake WikiHow image that originated on Instagram and spread on Reddit as a how-to on winning friends and girls. 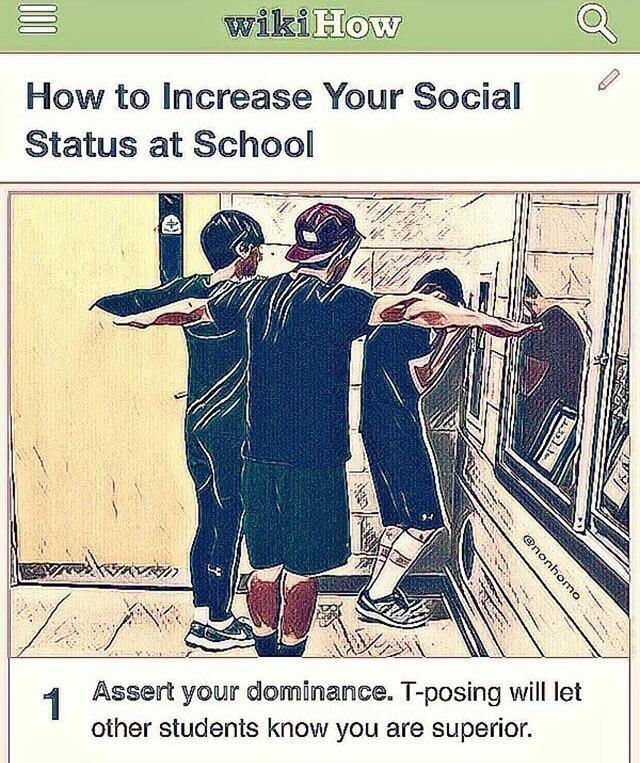 Some teens began T-posing in real life much like people were virally planking (lying down in unexpected places) in the early 2010s. Why? Irony, fun, and strangeness.

T-poses aren’t intended to be seen in video games, making them a rare and unusual surprise that lent themselves perfectly to internet culture—where absurdity is often prized. In May 2018, a hoax was even started stating that the T-pose was actually a white supremacist gesture.

The T-pose grew yet more popular through the wildly successful online game Fortnite, which made T-pose one of its emotes (stylized movements and dances) available for purchase in October 2018.

y'all mind if i t-pose?
@JoostGwn, November 2018
BREAKING NEWS naked man bursts into schools to perform an act of "T-POSE" DETAILS UNAVAILABLE the number of victims remains unknown our- [content deleted]
@IlIIlIIIlIIlIll, November 2018 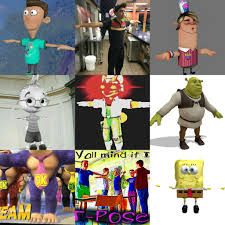 T-pose is used by both 3D animators and the video game industry when discussing the design of characters.

Outside of the industry, expect to encounter T-pose in internet and gaming culture, where the term and position is mostly used with humor or absurdity. It is especially used with respect to T-posing as a joking way to be socially dominant.

This is not meant to be a formal definition of T-pose like most terms we define on Dictionary.com, but is rather an informal word summary that hopefully touches upon the key aspects of the meaning and usage of T-pose that will help our users expand their word mastery.