Teethpaste is a humorous form of toothpaste. It typically comes up in considerations of or jokes about why tooth isn’t plural in toothpaste.

Where does teethpaste come from? 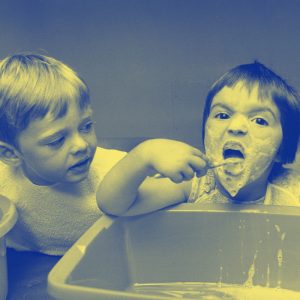 If toothpaste is a substance used to clean all of a person’s teeth, then why isn’t it called teethpaste?

Therein lies the joke about toothpaste and broader observations about the irregularities of the English language that teethpaste highlights.

Joke, indeed. Early record of teethpaste can be found on internet Usenet forums as early as 1997. It’s a classist joke, one that makes fun of the South as backwoods. It goes: Why do you suppose that Arkansas invented toothpaste? If any other state did, it’d be called teethpaste! The punchline is that the people are so degenerate they only have one tooth.

So why is it toothpaste instead of teethpaste?

The short answer is that English is weird. The long answer is that compound words generally use the singular form of a word to represent the whole, including those involving body parts: hairbrush, footstool, armchair, bookcase, etc.

While we use toothpaste to brush more than one tooth, the English language has a logic all its own. This hasn’t stopped people, however, from continuing to troll dictionaries—or toothpaste manufacturers like Colgate—by playfully insisting, like @stephenjmolloy, that teethpaste is the correct term.

It's teethpaste and you know it. @colgate

It’s teethpaste and we all know it @Colgate

Why isn't it called teethpaste? / Are we only supposed to brush one? Have I been working way too hard this whole time.....
@violettbeane, June, 2017
Can you change toothpaste to teethpaste please, @Dictionarycom?
@chrispyFbaby, June, 2017 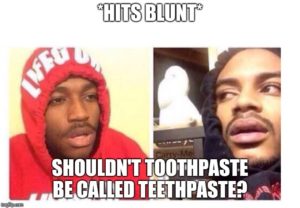 Toothpaste, of course, is the standard word. The word teethpaste is generally only used when people consider why toothpaste isn’t called so, typically as a musing about the curiosities of English.

Interviewer: Do you have any questions?

Me: Why it's not Teethpaste?

Interviewer: I meant questions about the job.

Instances of teethpaste often allude to @stephenjmolloy’s original statement: “It should be teethpaste and you know it.”

it should be teethpaste and you know it

This is not meant to be a formal definition of teethpaste like most terms we define on Dictionary.com, but is rather an informal word summary that hopefully touches upon the key aspects of the meaning and usage of teethpaste that will help our users expand their word mastery.