What is secondhand trauma?

Secondhand trauma is a form of trauma that a person experiences not due to something that has happened to them directly but rather due to some indirect connection (secondhand) to a traumatic experience. This could include encountering other people’s accounts of trauma or interacting with those who have directly experienced trauma.

In the context of psychology, the word trauma refers to lasting psychological injury or emotional impairment caused by a severely painful or disturbing experience (this experience can also be called a trauma).

These terms are often used in the context of first responders and other medical professionals, mental health professionals, and people who are continually faced with accounts of the traumatic experiences of others, especially those who are part of the community they identify with.

Where does secondhand trauma come from? 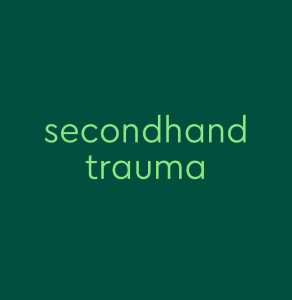 Usage of the term secondhand trauma increased in the 2000s and 2010s, but it has been used since at least the 1990s. Early uses of the term referred to trauma experienced by people who assisted victims of violence. The origin of the term and the increase in its usage may be influenced by the popularity of the well-known phrase secondhand smoke.

Trauma researchers have used similar terms to refer to indirect trauma since at least the early 1980s. Dr. Charles Figley is often cited as the first trauma expert to analyze the phenomenon, which he referred to as secondary traumatic stress in an 1989 book. In his research, Figley noted that medical professionals and the families of people who experienced trauma sometimes experience symptoms similar to those of posttraumatic stress disorder (PTSD). PTSD is a psychological disorder caused by direct trauma, such as experiencing war.

Secondhand trauma and similar terms are sometimes confused with the term compassion fatigue, which refers to the desensitization that is sometimes experienced by medical professionals, counselors, and others who frequently come into contact with trauma survivors. While people in these professions can and do experience secondhand trauma, compassion fatigue is typically considered to consist of feelings of burnout or apathy resulting from the constant demands of caring for others.

While the term secondhand trauma has become an increasingly popular way of referring to indirect trauma, the terminology around the phenomenon is likely to continue to evolve.

Being a therapist is a lot like being a salesperson only you don’t get commission but you do get secondhand trauma.
@Kickin_Kayla, December 2, 2019
And, Beaman says, It's easy to get burned out when working with patients, and it's possible to experience secondhand trauma from hearing patients' stories.
Molly Longman, The Des Moines Register, May 6, 2017

If you regularly meet trauma survivors or encounter upsetting incidents in your work, you may be experiencing 'vicarious trauma', also known as secondhand trauma. https://t.co/yUVZ0Vj79r

I worked with victims and survivors of family violence and I can say the secondhand trauma it gave me and my colleagues was pretty bad at times. I honestly can’t imagine e what all these front line workers are dealing with. They’re all going to need physical and emotional support

There's a lot of coverage surrounding the anniversary of #SandyHook today. To all the families of those affected, we send our love and support.

Secondhand trauma is real too. If you're struggling, text us at 741741. We're here for everyone affected by gun violence.

What other words are related to secondhand trauma?

This is not meant to be a formal definition of secondhand trauma like most terms we define on Dictionary.com, but is rather an informal word summary that hopefully touches upon the key aspects of the meaning and usage of secondhand trauma that will help our users expand their word mastery.