What is Schrödinger's cat?

Schrödinger’s cat is a famous physics thought experiment, which presents a paradox in which a cat in a box is somehow simultaneously both alive and dead.

Where does Schrödinger’s cat come from? 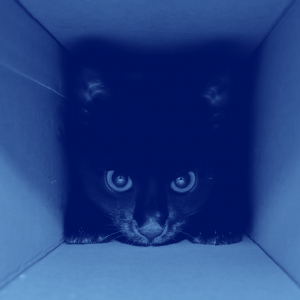 Austrian physicist Erwin Schrödinger won the 1933 Nobel Prize in Physics for his work in quantum mechanics, a branch of physics that studies the nature and behavior of subatomic particles. In 1935, Schrödinger came up with a famous thought experiment, now eponymously referred to as Schrödinger’s cat, as a criticism of what’s known as the Copenhagen interpretation of quantum mechanics. The Copenhagen theory stated, essentially, we can’t know what state or place an atomic particle is in until it’s observed, and so that particle could hypothetically be in all possible states or places until then.

Schrödinger found this theory flawed, and to demonstrate why, he asked his colleagues to imagine a “ridiculous case” where a cat, a tiny bit of radioactive material, a Geiger counter, a hammer, and a glass vial of poison were all locked inside a single box. Over the course of an hour, there is a chance that the radioactive substance might emit a particle (specifically, an alpha particle), and an equal chance that it might not. If the particle is emitted and hits the Geiger counter, a relay is set in motion whereby the hammer shatters the flask, releasing the gas and killing the cat. Thus, after an hour, there is equal probability of the cat being alive or dead, and an observer can open the box and see which state the cat is in. 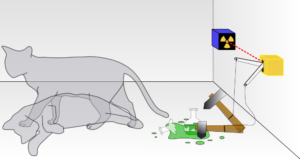 Now, if we scale up the Copenhagen theory from the quantum level all the way up Schrödinger’s scenario, then all outcomes simultaneously exist in all possible configurations until one opens the box, which, according to the complex mathematics of quantum mechanics, forces only one outcome: the cat is either alive or dead. The problem is that this would mean that until the very last moment before someone opens the box, the cat is somehow both alive and dead at the same time.

Obviously, a cat can’t be both alive and dead—vampire cats excluded—which was exactly Schrödinger’s point. The Copenhagen theory is a paradox. At what precise moment do the mathematical probabilities give over to physical reality?

Complex scientific theories don’t tend to become online memes, but Schrödinger’s cat is an exception, perhaps due to its rather visceral nature. References to Schrödinger’s cat have been featured in webcomics, images, YouTube videos, in poems, and T-shirts saying that “Schrödinger’s cat is dead” (as some physicists like to joke). The popularity of the LOLcats meme, which depicts house cats in various cute or amusing poses, has also inspired humorous depictions of Schrödinger’s cat, with many images of cats in cardboard boxes serving as a chance to reference the famous theory. For example, there is an image of a cat angrily clawing its way out of a cardboard box, with the caption “Schrödinger’s cat is alive … and very pissed off.”

On August 12, 2013, which would have marked Erwin Schrödinger’s 126th birthday, Google celebrated by marking its homepage with a cat-themed doodle.

Neglected friendships are like Schrodinger’s cat: until you check in, they exist as both dead and alive.
Caitlin Welsh, Junkee, April 13, 2017
I will save you and the laws of quantum physics all that trouble, and simply show you the Top 12 Schrödinger’s Cat memes.
Jeanne Devon, The Mudflats, August 2013

Maybe if I sat in a box it might help … like Schrodinger’s cat.
Can it be a very large wine box though ?

I take a Schrödinger's cat approach to email. The work contained within may or may not exist as long as you never read the email. Not sure if that’s how it’s supposed to work. ¯_(ツ)_/¯

Often these online references take the form of cats clawing their way out of cardboard boxes with various allusive captions, but Schrödinger’s cat has also made a lot of appearances in webcomics, which often riff on the complicated nature of quantum theory and its tendencies towards simplification and misinterpretation.

Meanwhile inside the box schrodinger's cat planning its revenge pic.twitter.com/ZlWUbX2zTZ

Sometimes, Schrödinger’s cat, or even simply Schrödinger, is used as a way to reference something as a paradox, unfeasible, or working against itself. For example, when India started issuing all its citizens unique 12-digit identity numbers known as Aadhaar, a meme circulated referring to the situation as Schrödinger’s Aadhaar, because the ID system was confusingly presented as both optional and mandatory at the same time.

Whatever I believe is the reality, or will be the reality. Schrödinger’s Cat applies to everything in the world. I will get whatever I want ❤️ #lawofattraction #Manifest #visualization #positive #witch #witchcraft #coven #cat #aura #secret #universe #吸引力法則 #心想事成 #超能力 pic.twitter.com/BsPHea40j7

This is not meant to be a formal definition of Schrödinger’s cat like most terms we define on Dictionary.com, but is rather an informal word summary that hopefully touches upon the key aspects of the meaning and usage of Schrödinger’s cat that will help our users expand their word mastery.