What does barbacoa mean?

Especially associated with Mexican cuisine, barbacoa is a slow-cooking style (mostly for shredded or chopped meats, often beef, pork, or lamb) over an open fire or fire pit.

Where does barbacoa come from? 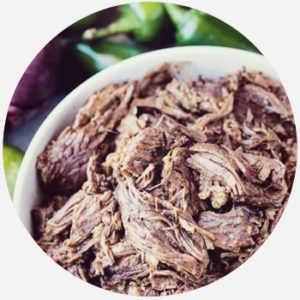 The term barbacoa was borrowed by Spanish colonists in the late 15th and 16th centuries to describe the cooking style of indigenous Caribbean peoples, such as the Taíno. They would wrap meat in green leaves and cook it on a rack of green wood, so that the cooking implements wouldn’t catch fire during the slow-cooking process.

The first recorded instance of the term was printed in Gonzalo Fernández De Oviedo y Valdés’s Historia General Y Natural de Las Indias. This was originally published in several installments in the 1550s.

In their native Haitian language, the Taíno originally used the term barbacoa or barbakoa for any kind of wooden rack, not just one used for cooking. From there, as the barbacoa style of cooking spread (as Spanish settlers moved into North America), the word evolved becoming barbecue.

Today, barbecue generally refers to grilling meat with various vinegar-, mustard-, or tomato-based sauces, while barbacoa is reserved for Mexican dishes, that are often braised and seasoned with chipotle peppers. Barbacoa is also especially associated with beef-based preparations. 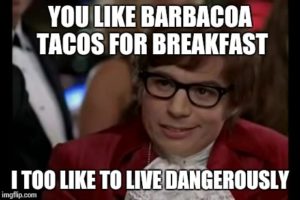 An individual broke into a #Chipotle restaurant and ate a full tray of barbacoa beef
ABC6
Occasionally, some parts of the lips get mixed into cheek meat during the making of barbacoa, the company explained.
Jennifer Earl, CBS News
That’s what makes the difference between barbacoa and American or Tex-Mex barbecue, the American brisket. The American/Texas barbecue is a different part of the calf.
Armando Vera, The Tacos of Texas
SEE MORE EXAMPLES

The proliferation of fast and fast-casual Mexican cuisine in the United States has helped popularize barbacoa as a foodie word and menu item. Even so, barbecue and barbacoa are sometimes conflated, though less so in areas of the country with sizable Mexican or Hispanic populations.

As the word has become more common, restaurants around the world are adopting barbacoa as part of their name and brand.

This is not meant to be a formal definition of barbacoa like most terms we define on Dictionary.com, but is rather an informal word summary that hopefully touches upon the key aspects of the meaning and usage of barbacoa that will help our users expand their word mastery.