a mixture of nuts, raisins, dried fruits, seeds, or the like eaten as a high-energy snack, as by hikers and climbers.

What is the origin of gorp?

Gorp, “trail mix,” was originally and still is mostly an American colloquialism dating from the 1950s. There is no satisfactory etymology for gorp (one common but improbable etymology interprets gorp as an acronym for good old raisins and peanuts; the Oxford English Dictionary notes that the verb gorp, “to eat greedily,” dates to 1913). 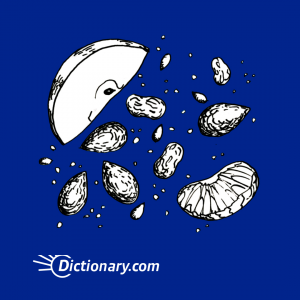 how is gorp used?

Oh, look, I found some MREs from that military-themed shindig where we taught a whole class to march and make their own gorp.

In that regard, every health-food nut knows what gorp is: a mix of cereal grains, peanuts, raisins, dates, little bits of chocolate or sugar candy. … To me, the word seems formed like Lewis Carroll’s creation of chortle by combining chuckle with snort: gorp is a wedded snort and gulp.

SYNONYM OF THE DAY
Double your word knowledge with the Synonym of the Day!
SEE TODAY'S SYNONYM
Load More
Aug 29 metrophobia
Aug 31 gorp
Word of the Day Calendar

having the same belief, attitude, or feeling.

What is the origin of kindred?

Kindred as a noun means “one’s relatives, kinfolk”; as an adjective, “sharing beliefs, attitudes, or feelings.” Kindred comes from Middle English kinrede, which has many, many spelling variants. Kinrede is a compound of kin and the obsolete suffix –red, –rede, which forms nouns from other nouns. Kin comes from the Old English noun cynn “sort, kind,” from the Proto-Indo-European root gen-, gon– (with many variants) “to beget, give birth.” Cynn is related to Latin genus (plural genera) “birth, descent, origin, kind” (genus and genera are current in English), Greek génesis “origin” (English genesis comes from Greek via the Latin Bible). The Middle English suffix –red, –rede comes from Old English –rǣden, a noun and suffix meaning “condition” (hatred is the only other frequent noun in English with the suffix –red). The spelling kindred with internal d first appears about 1400 and has two possible origins: It may either be epenthetic, intrusive, a glide consonant between the n and r, or the d may be from the influence of the noun kind “nature, type, class.” Kindred entered English in the early 13th century.

how is kindred used?

Garth’s look feels rummaged out of a costume trunk—bedraggled blond wig, Buddy Holly glasses, mom jeans—but Carvey plays him with such feline sensitivity that l have always recognized him as a kindred spirit.

“I think he’s lovely,” said Anne reproachfully. “He is so very sympathetic. He didn’t mind how much I talked—he seemed to like it. I felt that he was a kindred spirit as soon as ever I saw him.”

an irrational or disproportionate fear of poetry: Being forced to read John Donne's sonnets aloud in front of my English class gave me such bad metrophobia that I can't even look at greeting card poetry without getting sweaty palms and a dry mouth.

What is the origin of metrophobia?

“Gross in summer. Cold in winter. Jack-o-lanterns in fall. Bees in spring.” / “That’s like a poem,” she says. / I shiver. I think I might possibly have metrophobia.

This emphasis on the performance of poetry and using whatever medium might suit is surely also a step in the right direction in the fight to cure metrophobia and pull readers back in to the poetry itself.