a literary or rhetorical device that appeals to or invokes the reader’s or listener’s emotions through the repetition of words in quick succession.

What is the origin of epizeuxis?

Epizeuxis is a Late Latin noun occurring for the first and only time in the damaged Ars Grammatica “Art of Grammar” by the grammarian Flavius Sosipater Charisius—his name alone is worth repeating—whose work is valuable only because it preserves extracts from earlier grammarians. Late Latin epizeuxis comes straight from Greek epízeuxis, a noun that is used only in technical subjects such as botany and rhetoric, and as a rhetorical term is quite rare, occurring only twice in two Greek grammarians. Epízeuxis is a compound made up of the preposition and prefix epí, epi- “on, upon, over” and the noun zeûxis “yoking (of oxen), joining.” Zeûxis is formed from the verb zeugnýnai “to yoke”; its related noun zygón is from the same Proto-Indo-European source as Latin jugum, Germanic (English) yoke, Hittite yugan, Sanskrit yugám (“yoke, pair”; a related form yields Sanskrit yoga- “union,” English yoga). The final element, -sis, is a Greek suffix forming action nouns from verbs. The form -sis is the Attic Greek form of earlier -tis, preserved in some of the more conservative Doric dialects. The suffix -tis is related to the Latin suffix -tis, as in vestis “clothing” (compare vestment), from the verb vestīre “to dress, clothe,” and hostis “stranger, enemy” (yielding English hostile). Epizeuxis entered English in the late 16th century.

You might know epizeuxis best from Hamlet: When Polonius asks the prince what he is reading, Hamlet replies, “Words, words, words.”

SYNONYM OF THE DAY
Double your word knowledge with the Synonym of the Day!
SEE TODAY'S SYNONYM
Load More
Aug 23 inanition
Aug 21 sobriquet

What is the origin of sobriquet?

Sobriquet (also spelled soubriquet), “a nickname,” has an uncertain origin. Most likely it comes from French sobriquet “nickname,” from Middle French soubriquet, also soubzbriquet “a jest or quip”; also “a chuck under the chin, a gentle tap under the chin.” The only recognizable part of soubzbriquet is soubz, sous, from Latin sub “under.” It is possible that the second element is Middle French briquet, also brichet, bruchet, “breast of an animal, cut of meat,” English brisket. Sobriquet entered English in the first half of the 17th century.

how is sobriquet used?

And never mind the “Greedy McCreadie” sobriquet bestowed on him by former colleagues and workers who testify, with full mockumentary gravitas, to his lack of character.

As with most memorable nicknames, there’s a story behind it: Hya was the sobriquet that stuck after my siblings and I tested out various permutations of Hyderabad, the city she lived in, and a place I thought of as home.

What is the origin of comity?

Comity comes from Latin comitās (stem comitāt-) “friendliness, consideration, graciousness,” a derivative of the adjective cōmis “kind, obliging.” Cōmis perhaps comes from earlier cosmis, which occurs only once, in an inscription. If so, the syllable –smi– comes from the Proto-Indo-European root (s)mei-, (s)mei-, (s)mi– “to laugh, smile, wonder at,” which supplies Greek philommeidḗs (from philo-smeides) “laughter-loving,” a Homeric epithet of Aphrodite. (S)mei– yields Latin mīrus ”extraordinary, remarkable (usually in the good sense),” the verb mīrārī “to be surprised, amazed; look in awe or wonder at” (the source of Spanish mirar “to look at”). Also, in German komisch means “comic” and colloquially “strange, funny.” (S)mei– appears in the Germanic languages as smīlan, English smile. Comity entered English in the first half of the 16th century. 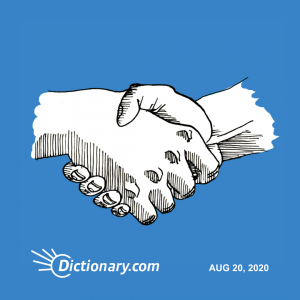 how is comity used?

the funeral underscored how Mr. Lewis believed that his decades-long civil rights fight could be waged in a spirit of comity—and with a belief that the American project was not fatally flawed, but perfectible in the hands of a citizenry willing to go to the polls and engage in nonviolent protest.

I believe I had no money to buy them, but there was an open account, or a comity, between the printer and the bookseller, and I must have been allowed a certain discretion in regard to getting books.