something of tawdry design, appearance, or content created to appeal to popular or undiscriminating taste.

What is the origin of kitsch?

how is kitsch used?

When the art critics call me “cornball” and my work “kitsch,” which I’m told is a derogatory term for popular art, I begin to worry. But I always pick up my brushes and go back to work. For better or for worse, I’ll never be a fine arts painter or a modern artist. I’m an illustrator, which is very different.

Norman Rockwell, My Adventures as an Illustrator, 1960

Allee Willis … lives in a light-pink house north of Hollywood with a bowling-ball garden and a heaving collection of kitsch.

Matthew Schneier, "A Queen of Kitsch Who Made the Whole World Sing," New York Times, June 7, 2018

SYNONYM OF THE DAY
Double your word knowledge with the Synonym of the Day!
SEE TODAY'S SYNONYM
Load More
Apr 17 breviloquent
Apr 19 kitsch
Word of the Day Calendar

What is the origin of chockablock?

Chockablock is a nautical term describing the position of tackle when the blocks are drawn close together. From the sense of the blocks being pressed tightly together, chockablock develops the sense “extremely full, crowded.” Chock and block are clear enough: they are synonyms for a wedge or other solid, heavy mass for holding something steady. The only problem with chockablock is the –a-: it is likely a reduced form of and.  Chockablock entered English at the end of the 18th century. 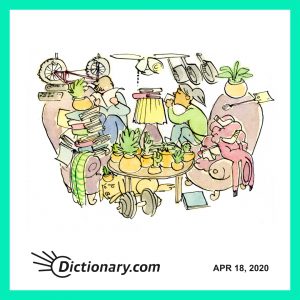 how is chockablock used?

I have a steel engraving of the Old Harbor chockablock with ships ….

John Steinbeck, The Winter of Our Discontent, 1961

The lyrics and the video are chockablock with suburban Americana signifiers: lawns, pools, divorce.