Save This Word!
This shows grade level based on the word's complexity.
messenger RNA.
QUIZ
WILL YOU SAIL OR STUMBLE ON THESE GRAMMAR QUESTIONS?
Smoothly step over to these common grammar mistakes that trip many people up. Good luck!
Question 1 of 7
Fill in the blank: I can’t figure out _____ gave me this gift.
who
whom
TAKE THE QUIZ TO FIND OUT

mRNA, or messenger RNA, is RNA that’s used to carry DNA’s genetic code outside the cell nucleus so it can be used as the instructions to build proteins.

DNA is a large, complex molecule (macromolecule) that allows cells to function and carries the genetic code that determines the traits of a living organism. DNA is in every cell of every living thing and contains the instructions that cells need to function. RNA is a macromolecule that functions alongside DNA to help cells make proteins, among other functions.

mRNA is created from a DNA template in the nucleus. An enzyme in the cell nucleus, known as RNA polymerase, unspirals the DNA and breaks the ladder in half down the middle. The enzyme then reads the nitrogen bases (the rungs of the ladder) and makes RNA in a process known as transcription. mRNA carries DNA’s genetic code to structures called ribosomes in the cytoplasm (the middle layer of the cell between the nucleus and the membrane). The ribosomes “read” this code (the nitrogen base sequence), which specifies the amino acid sequence for protein synthesis—the creation of proteins. Once the protein is built, the cell destroys the mRNA.

We took a microscopic look at the differences between mRNA, RNA, and DNA, and their vital roles. Read all about it here!

Why is mRNA important?

In the 1950s, scientists Elliot Volkin and Lazarus Astrachan recognized a distinct form of RNA—one strongly resembling DNA but whose function they couldn’t yet determine. In 1961, Sydney Brenner, François Jacob, and Matthew Meselson determined mRNA’s role in protein synthesis and named the molecule based on its function as a kind of messenger.

mRNA is a crucial part of the cell’s process of protein synthesis. Proteins have many essential jobs within a living thing. For example, your immune system produces proteins called antibodies to fight germs. Without mRNA, the cell would not be able to transmit protein-making instructions from DNA.

mRNA is one of three three major kinds of RNA, along with ribosomal RNA (rRNA) and transfer RNA (tRNA). rRNA is a part of ribosomes that allows mRNA to function. Ribosomes produce tRNA, which brings them the needed amino acids based on the code specified by the mRNA.

Because mRNA cannot replicate itself and is naturally destroyed by cells after being used, mRNA from viruses has been used to develop cheaper, safer antiviral vaccines. The vaccines developed to fight COVID-19 are based on mRNA vaccine technology.

What are real-life examples of mRNA?

This image is an illustration of the transcription process, in which mRNA (colored red) is made from DNA (colored purple). Their structures are similar but not identical. 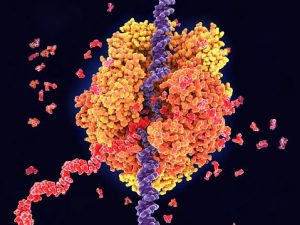 Getty. Messenger RNA (mRNA) being made from DNA.

mRNA is one of the three major types of RNA that students learn about in biology class. It has been used to develop vaccines.

How does the mRNA COVID vaccine work? pic.twitter.com/WW6s7or23W

mRNA is used by all cell to make proteins. It doesn't alter your DNA. Your cells use mRNA from the vaccine to make the spike protein from COVID. Your immune system responds to it, creates antibodies to neutralize it if ever sees it again. You cannot get COVID from the vaccine. pic.twitter.com/q9le3RKxE5

What other words are related to mRNA?

Ribosomes read the code contained within mRNA to make proteins.