What does 🅱️ B Button emoji mean?

The negative squared Latin capital letter B emoji, 🅱️, (that’s a mouthful) has come a long away from its intended meaning.

It began as a way to represent the blood type B, evolved into a way to signal the Bloods online, and was finally appropriated by internet culture for absurdist or racist memes.

Some people use it more innocuously just as a creative stand in for the letter B in texts or on social media.

Where does 🅱️ B Button emoji come from? 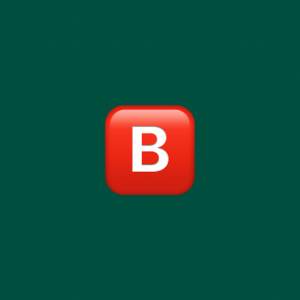 The Unicode Standard officially calls 🅱️ the negative squared Latin capital letter B emoji, but it’s commonly referred to as the B button emoji, a much more convenient name … because seriously that’s a long name.

B button emoji was approved under Unicode 6.0 in 2010. Across platforms, it appears as a white, capital letter B on a red square. It was originally intended to represent the blood type B alongside A (🅰️), AB (🆎), and O (🅾️) because you totally need to represent your blood type in emoji form all the time, right?

In East Asian countries like Japan, there is a popular belief that a person’s blood type influences their personality, character, and compatibility with others. People there took to the B button emoji to communicate their blood type on social media, especially in dating and romantic contexts. Aha.

In the US, the B button emoji went down a completely different path. The Los Angeles-based street gang, the Bloods, have been known to change words with the letter C, the first letter of their rival gang the Crips, to Bs (e.g., boolin‘ (cooling) and Bompton (Compton)).

The B button became especially popular, and controversial, on the internet after YouTuber Swolotag trolled Hillary “🅱️linton” in a widely viewed video in October 2016 called “Spell Icup Ni 🅱️🅱️a.”

Here, the B button emoji replaced the Gs in nigga, with nibba. The video plays on stereotypes of black people and feminists and seems deliberately designed to “trigger” so-called libtards.

Into the late 2010s, the use of the B button emoji quickly became associated with problematic and sometimes deliberately racist memes on social media like Reddit and Instagram known as “deep fried” memes.

Examples of 🅱️ B Button emoji

I can confirm that IHO🅱️ burgers are surprisingly really good
@Parappa_SSB, June, 2018
The “B” emoji has become so prevalent a part of internet culture that a major meme forum recently voted on whether to ban it altogether...There were 20,000 votes cast in the poll on Reddit’s r/dankmemes, a hotbed for edgy memes, and "B" survived by a razor-thin 30 votes.
Jay Hathaway, The Daily Dot, June, 2017 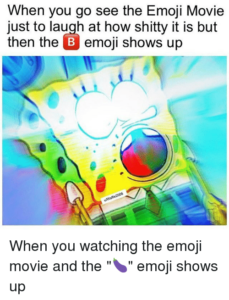 Who uses 🅱️ B Button emoji?

Use of the B button emoji has a lot of controversy for one little red letter. Some question the way white internet users have appropriated black (internet) culture, particularly with 🅱️. Memes using 🅱️ posted to Reddit, especially r/dankmemes, are usually racist, so there’s that.

The overuse of the B button emoji also sparked a backlash in meme culture in early 2017. As discussed, people began replacing just about any consonant with 🅱️—and some internet-istas felt it was uninspired meme-ing. Of course, the thing about the internet is that the more you complain about something, the more people are going to troll you … beware.

yall it's ihop not iho 🅱️

This is not meant to be a formal definition of 🅱️ B Button emoji like most terms we define on Dictionary.com, but is rather an informal word summary that hopefully touches upon the key aspects of the meaning and usage of 🅱️ B Button emoji that will help our users expand their word mastery.