What does 😳 Flushed Face emoji mean?

Let’s face it, Sky Ferreira was right, everything’s embarrassing: having a crush, tripping, farting, tampons falling out of your bag, tripping while farting and dropping tampons out of your bag in front of your crush …

Luckily, we have the flushed face emoji to express the full range of embarrassing, humiliating, and cringe-inducing experiences you might feel.

Where does 😳 Flushed Face emoji come from? 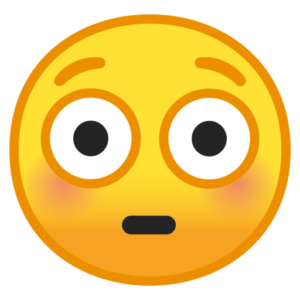 It’s easy to imagine that Eve would have texted the flushed face emoji to Adam after being caught nibbling on the forbidden apple … embarrassment at a mistake is an emotion as old as time.

And so the flushed face emoji came into Unicode with the first round of emojis in 2010.

In texting, this emoji is used by people who have received a text they aren’t a hundred percent cool with. Insomniac Magazine calls it “blushing smiley face’s ratchet stepsister” and instructs you, upon receiving one, to “apologize immediately, ideally with actual words.” On Hello Giggles, Madison Vanderberg suggests using it if you receive an unwanted nude, “If you’re polite, you hit them with this emoji.”

That’s because this yellow face stares directly ahead with red-tinged cheeks. On Google devices the blush is downplayed in favor of a sense of shock, and Microsoft’s perfectly round red circles look almost like tears. It’s the perfect way to express a truly cringey feeling.

I'm so embarrassed. Idk what possessed me to wear flips in the middle of Oct. & this is the 2nd time! *slaps wrist* 😳😒
@Carinda_Loves, October, 2016
I keep thinking about everything I went through making this movie documentary!! Had to go to a Trump Rally😳 met some nice and some messed up people .. it was an experience I will NEVER forget and I can’t wait til ya watch it in theaters ❤️❤️
@omgAdamSaleh, September, 2018
SEE MORE EXAMPLES

The flushed face emoji is perfect for those situations in which you have done something so gross it’s embarrassing … but you still want to announce it to the world:

If you love schadenfreude, look for this emoji in the captions of YouTube videos broadcasting others’ humiliation.

Because the flushed face emoji can also be read as an expression of shock, it can be used to convey a generally freaked out feeling.