Anyone up for a game of Canasta? The playing card black joker emoji, 🃏, depicts the joker card found in many popular card games. Quite often, the emoji is used to convey a sense of evil, creepiness, or mischief.

Where does 🃏Playing Card Black Joker emoji come from? 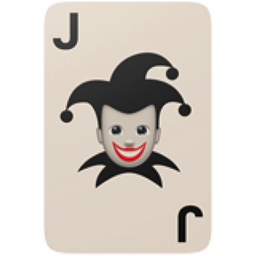 Also popularly called joker, the playing card black joker emoji joined the emoji family back in 2010 as part of Unicode 6.0.

The emoji is consistent across platforms in that all depict a playing card with a court jester (joker) in the center, but the appearance of the joker varies widely across platforms, as shown in the screenshot below. Apple features a joker dressed in black while Samsung’s design has more Korean-inflected cartoon style. 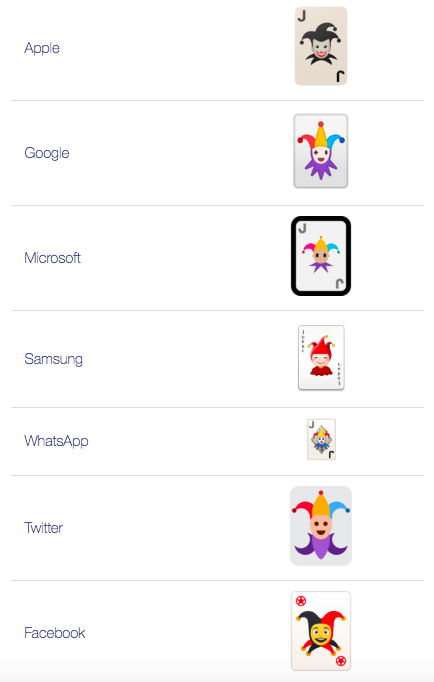 Beautiful packaging is in the cards 🃏
@packlane, June 2018
🃏 THE JOKER IS BORN. 🃏 / The final episode of Batman: The Enemy Within is two unique finales (and two possible Jokers) in one episode. / "Same Stitch" premieres March 27.
@telltalegames, March 2018
Do his eulogy from "The Man Who Killed Batman" by Paul Dini. It's one of my all-time favorite Joker speeches. I've performed it a few times in public. It has all the colors in the rainbow & has the perfect ending: "Well that was fun...who's for Chinese?!" 🃏🤣👍
@HamillHimself, November 2018
SEE MORE EXAMPLES

On social media, posts making use of the playing card black joker emoji typically fall into one of three categories.

The first is as a reference to Batman’s famous villain, the Joker.

The second concerns all things related to playing cards and gambling.

The third main use of the playing card black joker emoji centers on conveying a general sense of playful evil, creepiness, or mischief (joking around).

Then again, there’s no telling exactly how people might use this emoji, considering it’s quite the wild card. (Hey-o!)