What does TERF mean?

Where does TERF come from? 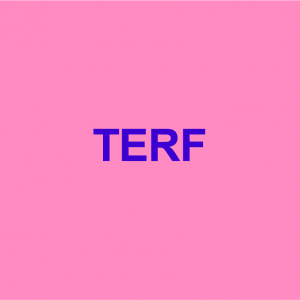 TERF is used to describe cisgender women who self-identify as feminist but who are opposed to including transgender women in spaces they reserve for people who were assigned female at birth. This is because they believe trans women are men and since men cannot coexist with their feminist ideologies, they exclude them from their beliefs and support. In fact, they often believe they should be denied rights and sometimes advocate for harm against trans people.

In use online since at least 2008, TERF has different connotations, depending on who is using it. Those who use it to describe others note that it’s descriptive in nature, and not insulting. But, well-known feminists who have been labeled TERF on the internet have come out to call the term a slur, because it is associated with violence and hatred.

In June 2020, Harry Potter author J.K. Rowling was notably labeled a TERF after she posts tweets many saw as anti-trans; Rowling defended herself from criticism, arguing that denying biological sex is misogynistic.

While some people who are called a TERF say the word is derogatory, LGBTQ advocates say those who hold such views deny transgender people their full humanity and go against what the medical community today has accepted as scientific fact around gender and sex.
Ryan W. Miller and Hannah Yasharoff, USA Today, June 9, 2020
"TERF IS A SLUR," people say, as if to completely spackle over the fact that excluding and neglecting the existence of a whole group of people is ACTUALLY BAD. But calling it out, they say, is just as bad, or maybe worse? (Spoiler: it ain't.)
@ChuckWendig, June, 2018

TERF is often used by transgender advocates and has largely replaced usage of the phrase RadFem to describe this particular sector of women.

The phrase punch a TERF is often used on social media, particularly on Twitter. Trans advocates use the term to dismiss TERFs and their unsupportive statements and beliefs about trans people. However, the use of phrases like this has led to actual violence.

This is not meant to be a formal definition of TERF like most terms we define on Dictionary.com, but is rather an informal word summary that hopefully touches upon the key aspects of the meaning and usage of TERF that will help our users expand their word mastery.