What does Two Spirit mean?

Two-spirit is a third gender found in some Native American cultures, often involving birth-assigned men or women taking on the identities and roles of the opposite sex. A sacred and historical identity, two-spirit can include but is by no means limited to LGBTQ identities.

Where does two-spirit come from? 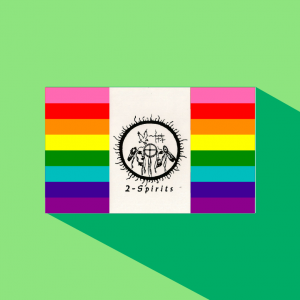 The term two-spirit is an umbrella term across American Indian and First Nations cultures for a person who embodies both male and female spirits within them, hence two-spirit. It originated at a 1990 conference for gay and lesbian Native people to replace the hurtful, derogatory, colonial term berdache (French for a “young male kept for gay sex”), used for gender-nonconforming individuals.

Two-spirit concept, however, is an ancient and traditional one in Native cultures, and not just a Native equivalent for queer or LGBTQ. It especially referred to birth-assigned men who took social identity and dress of women. It took diverse forms (and terms) within the hundreds of tribes across the Americas. Two-spirit identity frequently involved special work roles in society (e.g., weavers, healers, caretakers), sacred status, roles in ceremonies, same-sex relations, and cross-dressing.

Our Two-Spirit ancestors were targeted, beaten, raped, murdered because colonizers thought they were evil, sinful…..they were targeted because of the power they held within many of our communities as leaders, healers, warriors…

Historically, two-spirited people especially suffered under white colonization and the abusive American Indian boarding schools in the 19th-20th centuries, which made them choose a gender and its roles rather than live as a third gender.

Two-spirit has spread in the 2000s with growing visibility and inclusion of gender diversity in culture. The topic has been featured in several documentaries and films in the 2000–10s, including the 2018 Miseducation of Cameron Post, following a two-spirit person sent to conversion camp.

However, some in mainstream culture have appropriated or misunderstood two-spirit outside of its complex and historic Native American cultural context. It’s important to note that while two-spirit is a term many Native persons use for all LGBTQ Native individuals, it’s not synonymous with LGBTQ.

Pop star Jason Mraz came under fire in July 2018 when he discussed his sexuality in terms of two-spirit, which he says his wife defined in terms of bisexuality. This was seen as a form of cultural appropriation.

Jason Mraz opens up about his sexuality to @billboard.

“I’ve had experiences with men, even while I was dating the woman who became my wife. It was like, ‘Wow, does that mean I am gay?’ And my wife laid it out for me. She calls it ‘two spirit’.” pic.twitter.com/ICOlmrQM1o

Okay but here is the thing Mraz, two spirit is a gender identity, not a sexuality. A Native American gender identity. It is not about sexual preference. It is about gender. This smacks an awful lot of cultural appropriation.

Privileged to hear Benny Michaud speak today @MoodDisordersCa @CDSBEO about her Métis, two-spirit background. Her Mom is seeing her speak for the first time!
@MarianLawMac, November 9, 2018
Not only did the Native-American population skyrocket in North America, but we've gone through a major shift in how Two Spirits are recognized and treated. . Today, dozens of Two Spirit organizations exist across the United States and Canada (North Valley Two Spirits, represent!). We have several of our own powwows, 501c3s and models that help sustain and preserve the Two Spirit way of life.
Samuel White Swan-Perkins, KQED, November 20, 2018

Two-spirit is used as a gender and social identity in Native American cultures.

“I Walk in the History Of My People” by Chrystos, two-spirit Native American (Menominee) queer activist+writer. Their work explores the intersections of queer and Indigenous identity, and social justice. Have a favorite QPOC creator? Let us know! 💌#NativeAmericanHeritageMonth pic.twitter.com/rsBOSJiPUq

While it can overlap with the western LGBTQ community, it takes diverse forms across tribes. As such, it is only properly understood in Indigenous contexts and used by Native persons.

Two-spirit is frequently used in discussions of the rights of Indigenous persons as it overlaps with the rights of gender-diverse people.

It was an honour to hear from women who are fighting to end violence against women, trans, two spirit and gender-diverse people. Thank you for your incredibly important work @MOSAICBC @EndingViolence @VSACentre @DisabAllianceBC @WestCoast_LEAF. #16days #EndGBV #MMIW pic.twitter.com/wXLZvURXvc

This is not meant to be a formal definition of two-spirit like most terms we define on Dictionary.com, but is rather an informal word summary that hopefully touches upon the key aspects of the meaning and usage of two-spirit that will help our users expand their word mastery.