Actual Cannibal Shia LaBeouf is a meme that depicts actor Shia LaBeouf as a bloodthirsty cannibal, inspired by a viral song by Tally Hall that portrays him as one.

Where does Actual Cannibal Shia LaBeouf come from? 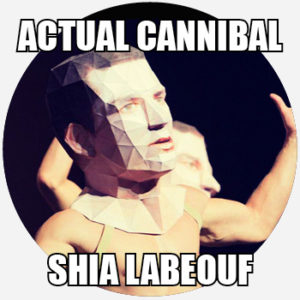 Thanks to his sometimes erratic, violent, and strange behavior, actor Shia LaBeouf, of Transformers fame, has been the subject of much controversy and internet memes. One of the more unusual memes is Actual Cannibal Shia LaBeouf. This meme started with Rob Cantor, of the indie rock band Tally Hall, who, in 2012, released a song online called “Shia LaBeouf.” The song’s lyrics depict an encounter in the woods with a murderous, cannibalistic Shia LaBeouf covered in the blood of his victims. In the first chorus, Cantor sings:

Living in the woods, Shia LaBeouf

Eating all the bodies

Cantor has said that the only inspiration behind his song was “sheer silliness” and the hope that Funny or Die, a popular comedy website and production company, might someday feature it in a video with the actual Shia LaBeouf.

The utter strangeness of the song’s lyrics, combined with the real Shia LaBeouf’s outlandish antics, quickly vaulted Actual Cannibal Shia LaBeouf into an online meme, inspiring gory, slasher-style videos, images, cosplay, GIFs, and humorous jokes and allusions on social media. Many began expressing confusion over the meme, with users on sites like Yahoo Answers asking if Shia LaBeouf was, in fact, an actual cannibal.

Sometimes I force friends into text based games of Actual Cannibal Shia LeBeouf.

Shia LaBeouf did finally acknowledge the meme in 2013, linking to the song on his Twitter and writing “You beat me.” For Halloween 2014, Rob Cantor released a new music video called “Shia LaBeouf Live,” with an orchestral arrangement of the song and interpretive dancers wearing a giant Shia LaBeouf head. The video ends with a single audience member clapping alone, which the camera then reveals to be Shia LaBeouf himself.

actual cannibal shia labeouf wasn't just a funny meme song it was a warning
@ChelleDoggo, April, 2017
“Cause of death: Actual Cannibal Shia LaBeouf. But it's ok because I got my comfy pants" -McKinlee planning what her headstone
@basilqu33n, April, 2017
L.A. songwriter Rob Cantor, 28, is the guy who wrote the ridiculous ditty about "actual cannibal Shia LaBeouf," who is "living in the woods, killing for sport and eating all the bodies.”
Jen Chaney, “The Shia LaBeouf cannibal song: The story behind the viral track,” The Washington Post, May, 2012
SEE MORE EXAMPLES

The overall strangeness—and power—of the meme has been helped along by LeBeouf’s own history of shocking or bizarre performances, from his angry “Just Do It” video to walking into red-carpet events wearing a brown paper bag over his head, “I am not famous anymore” written on the front of it.

I am not famous anymore. I am Shia LaBeouf – Happy Halloween everybody. 🎃 pic.twitter.com/cDSIczgP1W

Due to the song’s grisly content and the fact that the video was released around Halloween, Cantor’s “Shia LaBeouf” has become a popular, if ironic, Halloween song.

People generally use the term Actual Cannibal Shia LaBeouf to refer to the meme or to the song.