What does coomer mean?

Coomer is an internet meme based on an illustration of a scraggly male character who is mocked as an excessive masturbator. More broadly, coomer (with a lowercase C) is an often ironic insult for an oversexed young man or, more generally, a loser.

Where does Coomer come from? 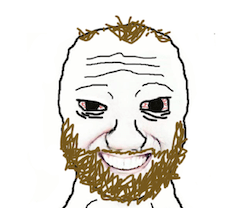 Coomer is considered a variation on Wojak (or Feels Guy), a bald-headed man used in various internet memes, often to express various ironic emotions. Specifically, Coomer is an intentionally poorly drawn computer image of a man’s face with a scraggly, light-brown beard and hair, wrinkly forehead, red eyes, and menacing but realistic-looking grin.

In early November 2019, Rolling Stone published an article claiming Coomer and No Nut November are connected to alt-right, misogynistic, and anti-Semitic places online. Some people online responded to this article with OK coomer, a riff on the then-recently popular OK boomer meme.

I’m a coomer I’ve lied to you all pic.twitter.com/4bu23qqqAO

OK Coomer may be issued in response to internet content criticizing pornography, male internet spaces, or hateful ideologies. The tone can be mean, humorous, or ironic.

This is not meant to be a formal definition of Coomer like most terms we define on Dictionary.com, but is rather an informal word summary that hopefully touches upon the key aspects of the meaning and usage of Coomer that will help our users expand their word mastery.