What does Harlem Shake mean?

The Harlem Shake is an internet meme that went massively viral in early 2013. It featured short videos of people wildly dancing to a song of the same name.

Where does Harlem Shake come from? 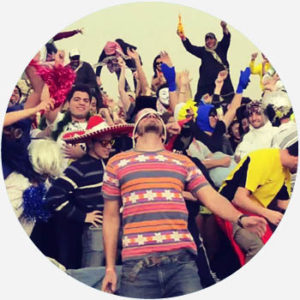 American DJ and producer Baauer (Harry Bauer Rodrigues) released a single called “Harlem Shake” in May 2012. In January 2013, internet personality Filthy Frank (George Miller) uploaded a comedy sketch to YouTube of himself and a small group of friends outrageously dancing to the song in funny costumes. After a few parodies went viral in early February, Harlem Shake spin-off videos mushroomed on the internet. According to YouTube Trends, users around the world were uploading over 4,000 Harlem Shake videos per day by February 10, 2013, when the trend was at its peak.

Fun to watch and easy to make, Harlem Shake videos boasted ever more creative and elaborate variations as the craze ballooned. They typically follow a formula: The videos are about 30 seconds long. They begin with one person (sometimes alone or in a group of people otherwise occupied) quietly dancing in a mask or helmet during the introductory buildup of Baauer’s “Harlem Shake.” When the bass drops, the video cuts to a group of people riotously, and sometimes outrageously, flailing and shaking their limbs along to the pulsing beat.

The song “Harlem Shake” opens with a sample of a voice saying, “Do the Harlem Shake.” This alludes to a dance style that originated in Harlem, New York City in the 1980s. The dancing in the Harlem Shake meme, however, more closely resembles the Bernie, a dance inspired by the movements of a propped-up corpse in the 1989 movie Weekend at Bernie’s, where dancers lean their heads back and convulse their dangling arms.

Over the course February 2013, the Harlem Shake exploded into mainstream media worldwide, with countless celebrities, sport teams, corporations, politicians, and activists contributing their own takes on the Harlem Shake. By March, though, the runaway trend was already losing steam.

Do you guys remember when harlem shake was a thing?

Nothin will make you dance like you've been touched by the Holy Ghost more than a spider dropping down on you in your car will. #harlemshake
@BiermanSays, March, 2017 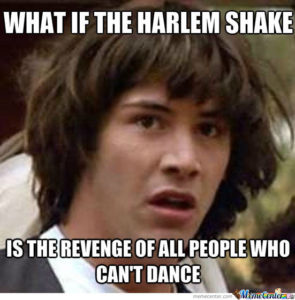 Meme Center
“Almost everyone in the US has come to know and love (or hate) the 'Harlem Shake' meme as a mostly benign, viral YouTube craze. But in Egypt and Tunisia, it's taken on another meaning entirely: It's an act of political protest.”
Alex Fitzpatrick, “'Harlem Shake' Becomes Middle East Protest Anthem,” Mashable UK, March 2013
Downloaded the harlem shake, so I can get people to recreate one at school ahaha #cray #harlemshake
@jimbings, February, 2013
SEE MORE EXAMPLES

Can we just bin off this whole “Brexit” thing and go back to the black and blue dress, the mannequin challenge and the harlem shake. It was much easier back then.

The Harlem Shake is mostly used in reporting, on social media (often as #harlemshake), and as references to instances of the actual meme. Since its 2013 peak, the Harlem Shake is often mentioned as a throwback to viral content and internet culture in general. In some instances, the term is used to characterize any frenzied movement evocative of Harlem Shake dancing. In others, the phrase Harlem Shake is employed as a verb.

For 2019 we’re bringing back the Harlem Shake

Be careful not to confuse the Harlem Shake meme with the earlier dance style. And if you do, be prepared for comments detailing this discrepancy.

This is not meant to be a formal definition of Harlem Shake like most terms we define on Dictionary.com, but is rather an informal word summary that hopefully touches upon the key aspects of the meaning and usage of Harlem Shake that will help our users expand their word mastery.