What does Heart Rate Meme mean?

Going viral on Twitter in April 2019, the Heart Rate Meme uses ASCII computer characters to illustrate a normal heart rate followed by an elevated heart rate. The elevated heart rate is meant as a humorous observation of something that excites someone or makes them anxious.

Where does Heart Rate Meme come from? 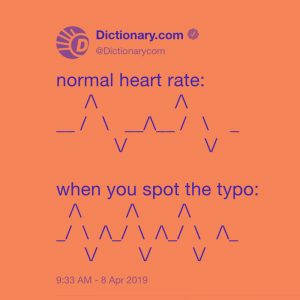 The Heart Rate Meme imitates the periodic spikes of an electrocardiogram out of characters on a keyboard. The first is meant as a normal heart rate and is introduced by some version of the phrase “normal rate heart.” The second, showing more frequent spikes and introduced my some version of the phrase “(my) heart rate when (rousing or agitating situation),” is in response to some situation that makes a person’s heart rate go up.

Let’s see the meme in action, from yours truly:

In 2011, the Twitter account @LMAOTeenThings posted an early version of what came to be called the Heart Rate Meme. (A similar, earlier example was founded on Twitter in December 2010.) The cause of the heart rate spike here? Being with someone you like. Aww, so wholesome.

The meme began remerging in January 2019, then took off that April (and earned its name Heart Rate Meme) when the Twitter account for the popular TV thriller Killing Eve posted a Heart Rate Meme in anticipation of the premiere of the show’s second season.

Twitter itself took notice of the meme and created their own, citing, once again, a crush sliding into the DMs (direct messages) as the reason for an accelerated heart rate. It earned 79,000 likes and helped make it viral. The Heart Rate Meme became got so popular in 2019 popular publications like Mashable and Bustle explained it. 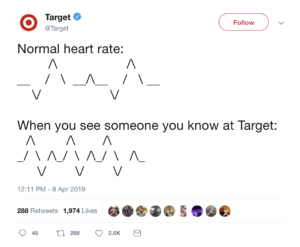 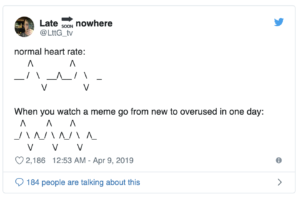 Screenshot from @LttG_tv / Twitter
The heart rate meme is one of these examples. It’s used to represent things that make you happy, excited or afraid. Basically, anything that gets your blood going, be that when someone text an ominous “we need to talk” or when you can’t feel your phone in your pocket.
Maria Loreto, The Fresh Toast, April 2019
SEE MORE EXAMPLES

The meme is generally used as a clever or funny way to describe things that make you excited or anxious, including matters concerning school, work, social life, technology, and embarrassing situations.

Official Twitter accounts for corporations, sports teams, and retailers especially took to the Heart Rate Meme, tailoring it to their businesses.

Twitter users came up with clever takes on the Heart Rate Meme, including showing a flatline, as if a person was “dead.”

when you open the exam paper and can’t even answer the 1st question:

This is not meant to be a formal definition of Heart Rate Meme like most terms we define on Dictionary.com, but is rather an informal word summary that hopefully touches upon the key aspects of the meaning and usage of Heart Rate Meme that will help our users expand their word mastery.