or GamerGate or #gamergate [gey-mer-geyt]

What does Gamergate mean?

Gamergate was an online movement primarily comprised of gamers, dedicated on its surface to preserving ethics in video game journalism. Due to the actions of some members of the movement, it’s often linked to misogyny within the gaming community.

Where does Gamergate come from? 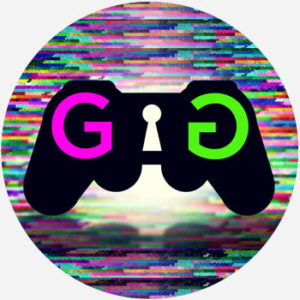 Gamergate was originally coined by Firefly actor Adam Baldwin as a hashtag, #GamerGate. It was created on August 27, 2014, in response to a controversy involving the game Depression Quest, developed by Zoë Quinn. Gamers criticized the game’s simplicity and its departure from standard gaming formats, and people claimed the game didn’t warrant its positive and extensive press coverage. Not long after, Quinn’s ex-boyfriend wrote a blog post falsely detailing how Quinn had cheated on him with five different guys, one of whom was a gaming journalist who worked for Kotaku. (Notably, said journalist never reviewed the game)

An online campaign accusing Quinn of exchanging sex for press coverage followed, and users across online communities (including 4chan, Twitter, and Reddit) all jumped on board. Threats and harassment ensued, and users leaked Quinn’s and others’ personal information in a practice known as doxxing. Another notable target was Anita Sarkeesian, an outspoken feminist media critic and blogger, who was forced to cancel a speaking engagement due to Gamergate-related threats on her life.

When #gamergate was in full swing, Kate Edwards received death threats and was in contact with the FBI. But there might be a silver lining pic.twitter.com/F45DJmSVbg

Supporters of Gamergate claimed to shed light on the sometimes unethical relationship between developers and journalists, as the two are often too close on a personal level. Their goal was to snuff out corruption and to spearhead an ethics reform in the industry. Despite this stated goal, the movement produced countless attacks on women who commented on the situation. As a result, Gamergate raised concerns about anti-women views in gaming as a whole.

#gamergate has made it into real college textbooks, ladies and gentlemen. and the account told here is laughably and demonstrably false.

i got out of college just in time. pic.twitter.com/x13sHXvtyZ

“I think there has been an increase in consciousness of misogyny among the reasonable/less involved - some silver lining to #GamerGate”
@smashfactory, September 2014
But it quickly became clear that the GamerGate movement was a mess – an undefined mission to Make Video Games Great Again via undecided means.
Matt Lees, “What Gamergate should have taught us about the ‘alt-right’,” The Guardian, December 1, 2016 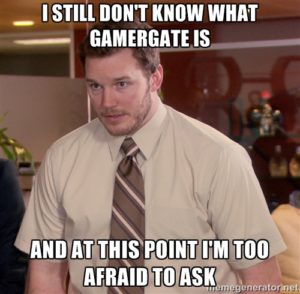 Medium
“Adding to the problem is that GamerGaters can insist up and down that their movement is not about misogyny, but the simple fact of the matter is that whenever a woman has an opinion about a video game, she gets attacked.”
Dan Seitz, “What Is GamerGate? Here’s An Explainer For All The Confused Non-Nerds Out There.” UPROXX (October 24, 2014)
SEE MORE EXAMPLES

Despite the stated goal of defending ethics in the gaming community, the Gamergate controversy widened into two camps. One the one side, people–primarily women–felt that the gaming industry was misogynistic and lacked diversity. One the other side, people–mostly men–felt that women were deflecting the conversation and not addressing the issue of corruption.

These days, most people who use the term Gamergate refer to the movement, though it has largely died out. This isn’t because people aren’t concerned about ethics and/or misogyny within the gaming industry, but perhaps because they don’t want to be associated with the toxic tactics employed by supporters of Gamergate. A supporter of the cause is known as a Gamergater.

And I fully agree with what was said on NPR. #NotYourShield is a method to silence other women. I'm not your punching bag, #GamerGate.

Dude you made a bad movie. Stop searching for alternate theories as to why we all hate it and go direct something else pic.twitter.com/5ta52mdw9f

I think as long SJWs and failing artists keep blaming #gamergate and #comicsgate for all their faults and failures, both will never really disappear. They´ve been declaring Gamergate dead, but they never shut up about it. As someone told me, both are their boogeymen. pic.twitter.com/N49M82khRP

This is not meant to be a formal definition of Gamergate like most terms we define on Dictionary.com, but is rather an informal word summary that hopefully touches upon the key aspects of the meaning and usage of Gamergate that will help our users expand their word mastery.