What does Lewis's Law mean?

Lewis’s Law is an unofficial principle of the Internet that states that the comments on any article about feminism justify feminism.

Where does Lewis’s Law come from? 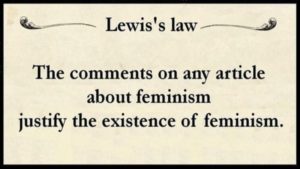 On August 9, 2012, British journalist Helen Lewis tweeted that “the comments on any article about feminism justify feminism.” She dubbed it Lewis’s Law, after herself. The use of law alludes to a general tendency in internet behavior; other examples include Poe’s Law (“Satirical expressions of extremism online are hard to distinguish from genuine ones without indicating intent”) and Godwin’s Law (“As a Usenet discussion grows longer, the probability of a comparison involving Nazis or Hitler approaches 1”) 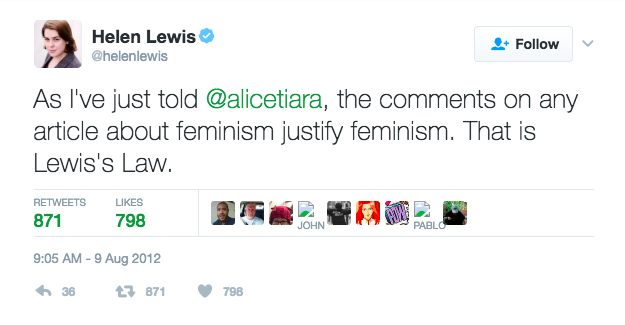 The comments under @TeleWonderWomen's "Why we don't read the comments" article are a sight. Lewis's Law in action pic.twitter.com/VJJYKOzkGR

Lewis’s Law would later also be added to other online resources Geek Feminism Wiki and RationalWiki, which lists Lewis’s Law as one example of Internet feminist laws. 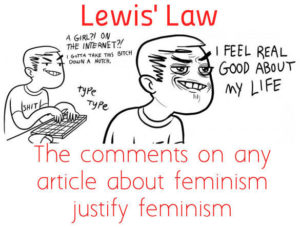 Lewis’s Law has maintained its currency in discussions of feminism and toxic masculinity online. Because, well, the internet. And men.

On social media sites like YouTube or Twitter, where comments are less heavily moderated, you can easily see Lewis’s Law in action. Case in point: the comments on a 2017 YouTube video of Emma Watson explaining why some men struggle with feminism… 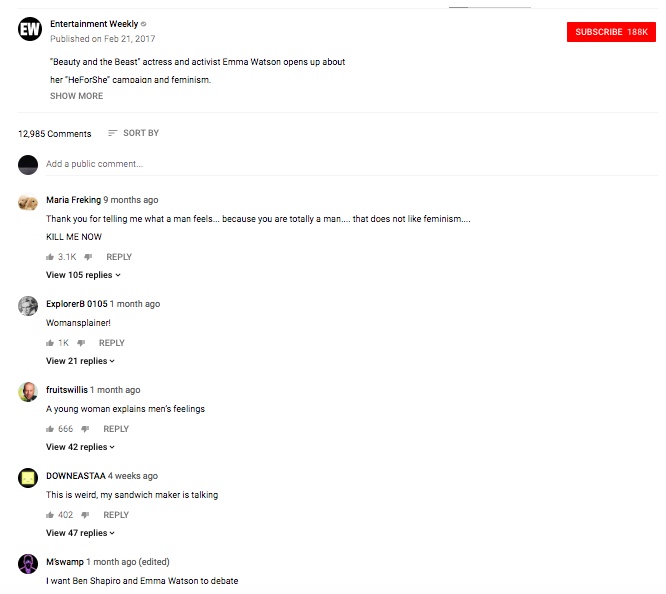 Lewis’s Law has also appeared in feminist books and blogs, but it is most often encountered in social media, where people invoking Lewis’s Law in citing examples of it in action.

Jesus, the replies to this. Lewis's Law for sure. https://t.co/9wKubH8oad

All the replies to women expressing excitement about Hillary's book demonstrate that Lewis's Law also applies to 140 characters or less.

This is not meant to be a formal definition of Lewis’s Law like most terms we define on Dictionary.com, but is rather an informal word summary that hopefully touches upon the key aspects of the meaning and usage of Lewis’s Law that will help our users expand their word mastery.