or micro-school or micro school [ mahy-kroh-skool ]

What does microschooling mean?

A microschool is a small, usually private school that typically has between 10–100 students.

While they predate the COVID-19 pandemic, microschools gained prominence in 2020 as traditional schools closed, moving much of learning at-home and online.

Looking for some educational activities? Check out Parent and Teacher Center for a wealth of resources.

Where does microschool come from? 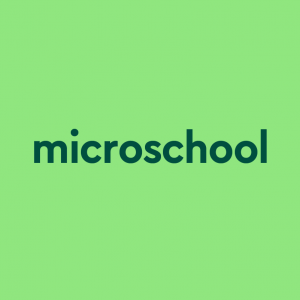 Microschool blends school with micro, meaning “extremely small.” Microschools are indeed small, as some enroll no more than a dozen or so students. Evidenced as early as 2010, the term microschool has been credited to British education blogger Cushla Barry, although its exact origins are unknown.

At this time, some intentionally small private schools were founded in such places as Austin, Texas, Brooklyn, New York, and San Francisco, California. In the latter city, for instance, entrepreneur and former software engineer Gever Tulley co-founded a microschool called Brightworks in 2011; a 2014 NPR story on the microschooling trend credited Tulley with coining the term “hyper-local micro-school.”

Fun to hang out with Anya Kamenetz (author of DIYU) at #TEDxAtlanta yesterday. We both like the "hyper-local micro-school" idea.

Inspired by a similar movement in the United Kingdom, more small private schools opened throughout the 2010s, seeking to update the one-room schoolhouse for the twenty-first century. Microschools are also often motivated by a desire to provide much more intensively student-centered education than some families feel public schools can—and at a more affordable tuition than private options.

Currently, there is no one governmental or educational definition of a microschool, but microschools share common features. In practice, microschools are considered to blend aspects of private schooling  and homeschooling.

Typically, a microschool usually has anywhere from a dozen to several dozen students of a variety of ages and grade levels. Often consisting of a single classroom run out of a family’s home, the teacher of a microschool works to personalize the curriculum for each student, often utilizing digital, hands-on, project-based methods.

Legally, microschools are generally considered private schools because many of them charge tuition—and this means microschools have to adhere to their respective state and local laws for accreditation.

Microschools gained more mainstream attention in 2020. As most traditional schools had to close due to the COVID-19 virus (which spreads easily in close, indoor gatherings, as commonly form in hallways and on buses, for instance), some parents looked to microschools as a potentially safer, more engaging, in-person alternative to virtual offerings.

Some parents even collaborated to form small, informal learning groups in their communities to supplement their children’s virtual schooling from their local district. These groups have been called learning pods, pandemic pods, and microschools, though they are not full-fledged, private operations as such.

As districts announce reopening plans, some parents are coming up with alternatives, such as online classes, outdoor programs or joining other households to create micro-schools.
Anne Marie Chaker, Wall Street Journal, July 21, 2020
No one in this DIY micro-schooling Facebook group seems excited about the libertarian utopia of constructing your own curricula from scratch with people you sort of know.
@janderson, July 13, 2020

In 2020, microschool became increasingly used to refer to ways various caretakers have resourcefully and creatively worked together to support the demands of schooling, working, parenting, and living amid the coronavirus pandemic.

For instance, a few parents whose kids go to the same school may take turns hosting small groups at their house throughout the week, providing social interaction for the students and opportunities for more focused help with their assigned work—and a break for the adults as they juggle their own jobs and responsibilities. Some parents may even hire tutors and teachers for additional support. While popularly called microschools, these cooperative pods or bubbles are generally not replacing their students’ public or private schooling by enrolling them into proper microschools.

Have you heard of a "micro-school?" @NPR_Ed's @anya1anya explains how old becomes new again in education: http://t.co/zU5GVRjTrb

New terms I’m learning today: Nano school, micro school, pandemic pods. (Seemingly synonymous? I can’t tell. Help me out there.) It’s a fascinating thing to watch these pop up as parents scramble for fall 2021 options in the Seattle area!

Parents in Poway join forces for 'micro-school' to help with distance learning https://t.co/rhzedpExPB

Curious, does homeschooling have to be provided by a parent? If not, is there any licensing requirements for the teacher/provider/facility. Never thought about the option of creating a micro-school.

Learn more about other ways we’ve been adapting to schooling during COVID-19 in our Vocab Builder on homeschool and virtual as well as our article on virtual school—whose meaning may overlap many other similar terms, including online school, online education, online learning, remote education, remote learning, and distance learning.

Still curious about more? Master the meaning of asynchronous in our article “’Asynchronous’ vs. ‘Synchronous’: Time To Learn The Difference.”

This is not meant to be a formal definition of microschool like most terms we define on Dictionary.com, but is rather an informal word summary that hopefully touches upon the key aspects of the meaning and usage of microschool that will help our users expand their word mastery.