What does No Pants Day mean?

No Pants Day is an unofficial annual holiday (first Friday in May) where people pull down their pants and walk around in their underwear.

Celebrated worldwide, No Pants Subway Ride (variously observed in early January) is an occasion for people to ride public transit in their underwear. Why? Just, why?

Where does No Pants Day come from? 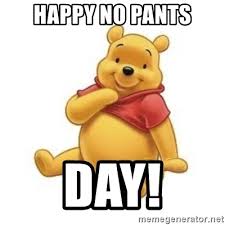 Legend has it that No Pants Day was created as a joke by a club at the University of Austin in Texas known as the Knighthood of Buh sometime in the 1980s. As the name makes plain, it was imagined as a day where people would walk around in their underpants.

As a similar gag in 2002, the New York City-based comedy collective Improv Everywhere, whose aim is “to surprise and delight random strangers through positive pranks” done in public places, staged the first No Pants Subway Ride. According to event organizers, the idea was to capture people’s reactions to someone walking on the subway in the middle of January dressed in a heavy winter jacket—but without pants. They also planted people who seemingly didn’t know each other to get on at every stop, without pants of course.

Only a few people participated in the first version of the No Pants Subway Ride, but since then, the event has become a worldwide phenomena. Every year in January (the specific date announced by Improv Everywhere), hundreds of people of all genders from Tokyo to Jerusalem take off their pants to ride public transit. Given the massive appeal of the No Pants Subway Ride, it has become the de facto No Pants Day, even though the official, Texas-inspired No Pants Day takes place in May.

⚡️ Today is the 'No Pants Subway Ride,' which was started by Improv Everywhere in NYC. It has since spread to several cities across the world. Here's how people are celebrating! Would you take part? #tictocnewshttps://t.co/Y2NDGMglNW

Examples of No Pants Day

I would consider it in the summertime, but winter. Oh hell no! #nopantsday
@KellyMitchell, January, 2018
PSA announcement: Today is NO PANTS DAY on BART! 1-2pm. Where do you need to go, just because? #NoPantsSF #BART #MakeSureYouSmile
@christinascity, January, 2018

Who uses No Pants Day?

On social media, No Pants Day celebration posts usually come in January in reference to the annual No Pants Subway Ride, which for better or worse, come with photos and videos.

Some people have taken matters into their own hands and decided for themselves when they want to celebrate No Pants Day. The verdict is still out on their level of seriousness, but you never know with people.

I know all Saturdays are No Pants Day! o/

Everyday is no pants day for me

Others, of course, are not huge fans of the holiday. At least holding No Pants Subway Ride in January spares us from seeing any swamp ass.

I do not understand no pants day on the metro. Like, have y'all BEEN on the LA metro? Some days I wish I was wearing EXTRA pants. #ew #hardpass

Why would be an organized “no pants day” in 5 degree weather??

This is not meant to be a formal definition of No Pants Day like most terms we define on Dictionary.com, but is rather an informal word summary that hopefully touches upon the key aspects of the meaning and usage of No Pants Day that will help our users expand their word mastery.