Feedback
No Pants Day
no rest for the wick...

What does no pun intended mean?

No pun intended is a humorous parenthetical comment used to acknowledge one has made a pun or other bit of overly cheesy or clever wordplay—sometimes unintentionally, sometimes not.

yo mama jokes, prank call, The Aristocrats, my mom, that’s what she said, I see what you did there, your mom, sofa king

Where does no pun intended come from? 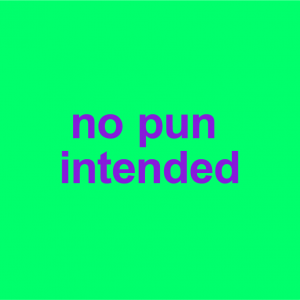 Adding no pun intended as an aside dates back to at least the early 1800s. From its start, the expression had a playful quality, used by a writer or speaker when they’ve made some wordplay, whether a pun or other double entendre, that was right on the nose.

An early example comes from a mid-1800s story about an offending turkey described as “fowl play (‘no pun intended’).” The phrase spread in the 20th century. Beat author William S. Burroughs crassly employed it in a 1937 piece for Esquire, for example: “I’m proud of my mother. She’s 71 and she’s still expanding (mentally I mean—no pun intended).”

Examples of no pun intended

BRO why do my ROOMMATES like the room to feel like ANTARCTICA. I CANT FEEL MY HANDS. They still cool tho (no pun intended)
@darafitz27, August 22, 2018

Who uses no pun intended?

No pun intended is most often used, ironically enough, to call attention to a pun one has made. Often these puns are deliberate, corny, but too wonderfully dad joke-y to resist … and other times the puns are inadvertent but realized in the moment, too droll or drily humorous to let slip by without notice.

EXCUSE ME… can we talk about the film Teeth? When Teeth first premiered 10 years ago, it was as a limited release. However, the cult-favorite has since spread by word-of-mouth (no pun intended) and may be as culturally relevant now as it was then. pic.twitter.com/nijI7YjtJL

This is not meant to be a formal definition of no pun intended like most terms we define on Dictionary.com, but is rather an informal word summary that hopefully touches upon the key aspects of the meaning and usage of no pun intended that will help our users expand their word mastery.

No Pants Day
no rest for the wick...
Home / Words / Pop Culture / no pun intended