What does sofa king mean?

This definition is sofa king amazing. Read that sentence aloud. Read it again. Get it? Sofa king is a cheeky pun on so fucking. Sofa king clever!

d'fuq, prank call, I see what you did there, fux, fuck this shit I'm out

Where does sofa king come from? 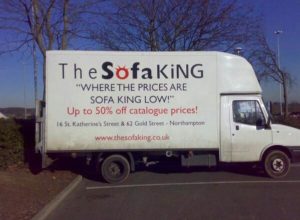 The phrase sofa king was used at least since 1999 by Santa Rosa, California-based punk band, Diesel Boy, in their album Sofa King Cool. The general public wasn’t exactly in agreement, though, as the album has faded into obscurity.

The term received more attention in the 2000s when it appeared in an internet prank egging on users to read the words I Am Sofa King We Todd Did aloud. A post on the message board Straight Dope was titled I’m sofa king stupid in 2000.

The term even passed federal regulations and made it on to the airwaves in SNL’s 2007 Sofa King Commercial skit, which centers on a business, Sofa King, run by an immigrant family who is unaware of what it sounds like when they said their couches are Sofa King great. (A UK retailer, Sofa King, had been getting away with this joke between 2001–12 with its tagline Our prices our Sofa King low!)

In 2013, a burger joint called Sofa King Juicy Burger in Chattanooga, Tennessee, proved so popular that it ran out of food on opening day. Despite criticism over the name by some members of the Chattanooga community, the owners justified it by noting the restaurant’s 45-foot long sofa. Sofa king sneaky!

Memedroid
Omg it is SOFA KING NICE out! / 😎😎😎😎😎😎 / Wish everyday was this temp. Don't @ me.
@WerdEmUp, August, 2018
It really is amazing. Mueller is investigating “people” in search of a “crime”. Nothing could more un-American, and cheerleader Comrade Tapper leads the media charge. Sofa King Nuts.
@mikeandersonsr, July, 2018
SEE MORE EXAMPLES

Sofa king is mainly used as a pun in contexts where it would be inappropriate to say so fucking. Internet users may use it to get around censors (or just to be cute or euphemistic) while small-scale, local businesses may adopt it in trying to pull an attention-grabbing fast one.

Lisa: What does a couch say to the other couch on the other side of the room?
Jennie: I don’t know, Lisa.
Lisa: We are sofa apart.
Jennie: What is wrong with you?
Lisa: It’s sofa king funny!
Jennie: Go. To. Bed. #JENLISA #BLACKPINK

This is not meant to be a formal definition of sofa king like most terms we define on Dictionary.com, but is rather an informal word summary that hopefully touches upon the key aspects of the meaning and usage of sofa king that will help our users expand their word mastery.