What does the Wadsworth Constant mean?

The Wadsworth Constant is the idea (and 2011 meme) that one can safely skip past the first 30 percent of any YouTube video without missing any important content.

We know, of course, you never skip past any of our content, though … right?

Where does the Wadsworth Constant come from? 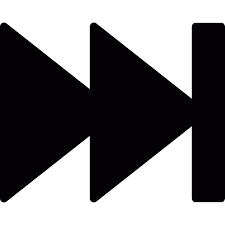 On October 1, 2011, users in the subreddit r/pics were discussing that perpetually vexing problem of how to fold a fitted bedsheet in a thread called “And so ends 20 years of frustration.”

One Redditor posted an instructional YouTube video on the topic, and the user u/Wadsworth replied: “For EVERY youtube video, I always open the video and then immediately punch the slider bar to about 30 percent. For example, in this video, it should have just started at :40. Everything before :40 was a waste. This holds true for nearly every video in the universe.” The notion is that the first third or so of a YouTube is just irrelevant introductory content.

Honestly there was nothing behind the name other than the user who suggested that the first 30% of any YouTube video was worthless. His name is Wadsworth. His post made a lot of sense, so i made the suggestion that “Perhaps this should be known as the Wadsworth Constant” and reddit took it from there.

The joking concept spread. Use of the term constant riffs on constants (physical quantities that are the same no matter when or where in the universe) in science (e.g., Planck’s constant). It also alludes to popular internet laws (e.g., Poe’s Law or Godwin’s Law).

The Wadsworth Constant should not be confused with the Wadsworth constant deviation system, which is a method of passing light through prisms invented by Frank L. O. Wadsworth in 1894.

Examples of the Wadsworth Constant 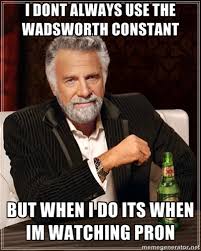 Meme Generator
I wish we could apply the Wadsworth constant to smartphone keynotes.
@MishaalRahman, August, 2018
Bah, should have applied the Wadsworth Constant, sat through a minute of intros only to find out this vid was a damn Portal parody song
@Totalbiscuit, October, 2011
Of our three-video sample size, Wadsworth’s Constant applies well to the latter two videos. If one applied the Constant to this study, there’s a clear takeaway: it works with complete accuracy.
Kevin Collier, The Daily Dot, October 2011
SEE MORE EXAMPLES

Who uses the Wadsworth Constant?

The Wadsworth Content has also appeared in popular culture. A 2018 Philadelphia improv comedy festival featured a one act play titled The Wadsworth Constant. Electronic artist earwigisbent uploaded a track called the Wadsworth Constant to Soundcloud in 2018. The track runtime is 2:33, but you should probably just start listening at 0:51.