What does tin roof, rusted mean?

A lyric from The B-52’s hit song “Love Shack,” tin roof, rusted is interpreted by some to mean “pregnant,” usually with an unintended baby.

Where does tin roof, rusted come from? 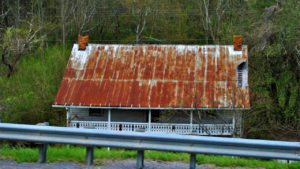 Tin roof rusted is one of the most famous lyrics from new wave rock band the B52’s 1989 song “Love Shack,” but it apparently came about by accident. While recording the vocals, the track stopped, but singer Cindy Wilson continued singing, which gave the band the idea to have a break in the song where Wilson says tin roof rusted: “You’re what? / Tin roof / Rusted!”

Rumor then spread that the lyric to meant “being pregnant,” but that was not the intent of the band. In a 2018 interview with Michigan’s mlive.com, Wilson set the record straight, saying that the lyric “was just part of a description of the vision in my head of what the love shack looked like,” adding that she’d been inspired by an old shack outside of their hometown, Athens, Georgia.

Wilson, however, wasn’t opposed to people deciding for themselves what her lyrics meant, saying in regards to tin roof rusted, “it’s amazing what people have come up with in the past about it. I kind of like that. Let the people participate in the meaning. I’m fine with that.” 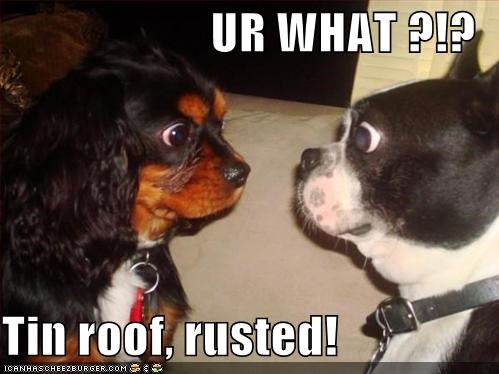 Ahem. Tin roof rusted. That is all.
@FlyoverJoel, July 2010
Call me an asshole all you want, but if you sing out "TIN ROOF, RUSTED" at the top of your lungs while Love Shack is on, I'll slap you hard.
@Faux_Ma, November 2011
Amelia Meena brought a few of the best aspects of the cabaret world together with her show Tin Roof…Rusted (which she informed us means “knocked up”). She sang about everyday struggles with their New York twist, she shared her personal story of finding love and being eight months pregnant (and still performing!), and she accomplished both of those with a “how can you not notice this?” voice.
Chris Struck, Cabaret Scenes, May 2018 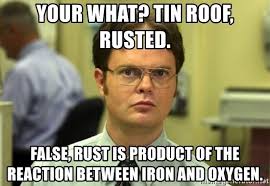 Due to the popularity of The B-52’s Love Shack and the speculation surrounding the lyric, fans of the song often use tin roof, rusted on social media or in product names (e.g., Tin Roof Brewing Company’s Rusted IPA) simply as a reference to the track.

"You're what?
Tin roof
Rusted!

Occasionally, a select few use the phrase to refer to pregnancy, though also usually in knowing allusion to the popular gloss of the lyric.

This is not meant to be a formal definition of tin roof, rusted like most terms we define on Dictionary.com, but is rather an informal word summary that hopefully touches upon the key aspects of the meaning and usage of tin roof, rusted that will help our users expand their word mastery.