What does dick chicken mean?

While dick chicken has previously been used as a nickname, insult, or just funny word combination, the game of dick chicken is where two men, usually straight, lower their pants and walk toward each other on a path that would cause their penises to collide … until one loses by veering from the path, or “chickening out.”

Where does dick chicken come from? 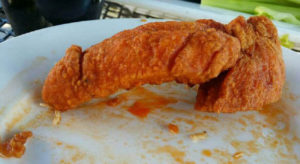 The game of dick chicken is recorded on, where else, Urban Dictionary by 2010. Its name comes from the game of chicken, generally where two drivers (or operators of other vehicles) drive head on toward each other. The first one who steers to avoid the collision is said to be chicken, or “a coward,” and loses—if you want to call avoiding a fiery crash losing. Chicken for “cowardly” can be found in Shakespeare, if you’d believe it, while playing chicken is recorded at least by the 1960s.

Dick chicken is a much safer, if more phallic, alternative to chicken. Whether people actually play it is questionable, but the game has a bro-ish reputation. It was popularly featured in a 2015 episode of the TV sitcom The League. In it, an argument between two friends escalates, leads to a challenge, and, naturally, a game of dick chicken ensues. Because men. Because sitcoms.

An alternate version of dick chicken involves two straight men dropping their pants and staring deeply into one another’s eyes. The person whose penis moves first loses. It’s not clear where this one originated …

Hate when my boys don’t want to play dick chicken with me..
@mcapuano_, August, 2018
But when an old, unsettled score revolving around “Dick Chicken” erupts in a duel between Pete and Kevin, the dam breaks and everyone comes flooding out into the open. In front of Sofia and her mother, two adult men whip out their penises and charge each other, snack wrappers and other detritus of Ruxin’s man corner around their feet.
Shelby Fero, AV Club, September, 2015

Outside The League, similar comedic situations, and bro-downs, dick chicken mostly pops up as various incarnations of penis-shaped poultry for comedic effect.

In the 2000s, a Brooklyn-based street artist caused a stir with their tag, Dick Chicken, along with sidekick Pussy Ham. The dick chicken graffiti was of whole chickens with a penis head. 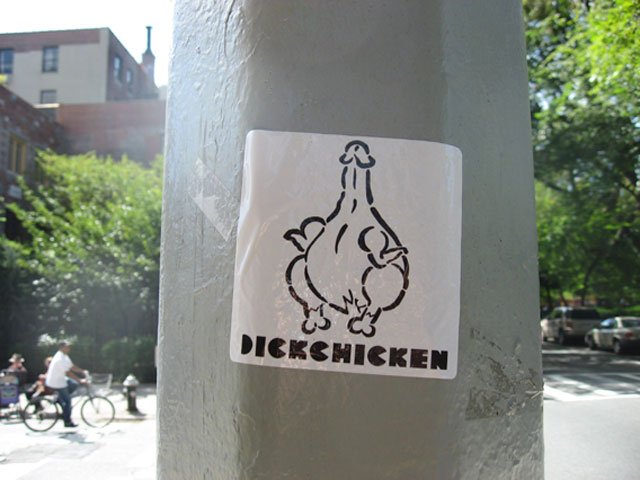 And then there’s the fantastically weird Aussie electronic duo Mink Engine who released a 2005 song, “Dick Chicken,” featuring an anthropomorphic drumstick of fried chicken in the video.

Director Jeff Snell made an absurdist short video, Dick Chicken, in 2015. It follows the hard times of a runaway toy named Dick Chicken and the grief he caused the family he abandoned. We’re not crying, you’re crying.

This is not meant to be a formal definition of dick chicken like most terms we define on Dictionary.com, but is rather an informal word summary that hopefully touches upon the key aspects of the meaning and usage of dick chicken that will help our users expand their word mastery.