What does ELI5 mean?

ELI5 is short for “Explain Like I’m 5,” a request for a simple explanation to a complicated question or problem.

Where does ELI5 come from? 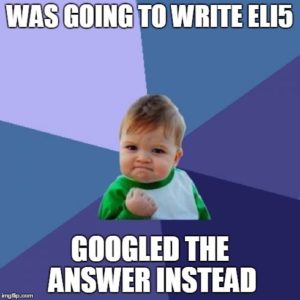 ELI5 stands for the phrase, “Explain Like I’m 5.” The 5 refers to a five-year-old child, the implication being that the person requesting the explanation has a limited or naive understanding of the issue.

Explain Like I’m 5 comes from the name of the subreddit r/explainlikeimfive. This subreddit was created by the user bossgalaga in September 2011—about a month after ELI5 was entered into Urban Dictionary, and two months after the term first appears on Twitter by user @NinkiCZ

I'm loving the ELI5, saves me a lot of time from searching Wikipedia. #fb

However, bossgalaga got an idea for a new subreddit that would be a “friendly” place to ask questions without fear of being mocked if they were deemed obvious or stupid, as can be the case on Reddit. Bossgalaga’s idea got a lot of positive feedback, and r/explainlikeimfive quickly became one of Reddit’s most popular boards. By early 2019, r/explainlikeimfive was ranked as the 17th most popular subreddit on the entire site, with over 16 million subscribers.

Sometimes we all need things explained to us as if we were children. Not patronising. Very educational #ELI5 http://t.co/9nfftsf

Bossgalaga launched their new subreddit by explaining its name, Explain Like I’m Five. Reddit users quickly began prefacing their questions with a shortened ELI5. This shorthand became so commonplace that soon even bossgalaga began using ELI5.

Thanks to the exploding popularity of the subreddit, ELI5 became a popular Google search term in the 2010s, and its use soon spread to mainstream social media platforms.

ELI5: What are all the things that happens to your body in outer space if it didn't have any protection… http://tumblr.com/xfb3ybtjxh

ELI5: The plot of the Metal Gear Solid series?
bossgalaga (user), Reddit, August 2011
...if February 11, 2016 was the first time you had ever heard gravitational waves, you might still be scratching your head over what the big deal is. Maybe you read a few news articles and an ELI5 on Reddit that was still pretty dense and gave up.
Kaleigh Rogers, Motherboard, July 2016 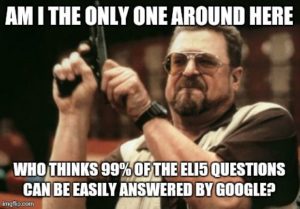 The r/explainlikeimfive subreddit remains incredibly popular, but its ELI5 abbreviation has become so widely used on Reddit that even people who have never used that specific subreddit are familiar with it.

Users typically begin a simple explanation to a question with ELI5, as is often done on r/explainlikeimfive. Introducing a query in this way tells responders: “Hey, can you break this down for me in laypersons’s terms?”

ELI5: How does adding money to be circulated affect the economy? https://t.co/04SMh29yy6 @ahareenalsultan

Other users employ ELI5 like its original verb phrase, explain (it) to me like I’m 5, in context.

Can someone ELI5 the steel furnace thing?

Yet others use ELI5 like a noun, a synonym for a “simple, clear explanation.”

Yo any EU people have a tl;dr of what's going on with Brexit stuff? Preferrably an ELI5 for an American?

This is not meant to be a formal definition of ELI5 like most terms we define on Dictionary.com, but is rather an informal word summary that hopefully touches upon the key aspects of the meaning and usage of ELI5 that will help our users expand their word mastery.