What does ight mean?

If you’re hanging in there, having a good time, or if you’re just a decent human, you’re ight. Ight is black colloquial English for all right.

Where does ight come from? 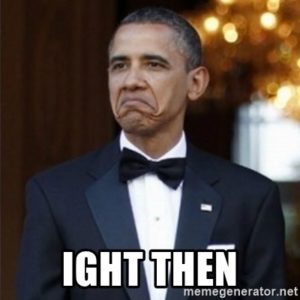 The spellings aight and ight date to the 1990s, though almost certainly found in speech well before then. One early example of aight in pop culture can be found in the song “I’m Looking for the One (To Be With Me)” by DJ Jazzy Jeff & The Fresh Prince (Will Smith). On it, Smith raps: “You feeling’ aight? You feelin’ aright? …Well next time bring a friend with you / So (they can feel the same way too).” The song reached #79 on the Billboard Hot 100, and helped introduce the form aight to a wider audience.

Into the 1990s, aight and ight were frequently featured in popular black culture, especially music and TV. With growing mainstream popularity of hip-hop music in the 2000s, ight or aight went more mainstream, although remained closely associated with black culture.

They ‘aight sneakers. I’m still going to buy them just because of the style.
Chris Fierro quoted by Jordan Frias, Boston Herald, February 2019
I been expressing my feelings to strong 😭. And I’m actually tired of it. So imma just hit y’all with “oh fasho” “oh, Ight bet ”
@globalvivoo, February 2019 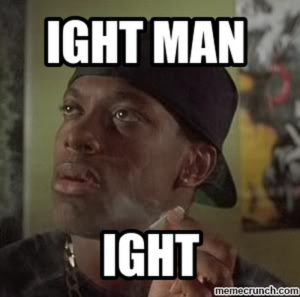 Ight and aight are typically heard in colloquial Black English and writing, especially in hip-hop and on social media. Other colloquial variations of all right include a’ight, ‘ight, a-ight, all meant to point back to the original all right.

Like the original all right, ight can be an interjection expressing affirmation, assent, or enthusiasm, à la OK, e.g., Ight, I’ll you meet you there. or You got the tickets to the concert! Ight!

Her: Come over I cooked for you
Him: Ight what u cook?
Her: Fried fish, hold on look pic.twitter.com/L3H0CN3oXg

Similarly, ight can be used as a discourse marker, especially to introduce a new subject or express a skeptical attitude about a topic, e.g., Ight, you sure you’re going to stick to that diet.

Ight so I’ve been trynna write an essay for the last two hours and this is literally me pic.twitter.com/IIpQSThr0K

I left New York for this ? Yea ight pic.twitter.com/7iyfwQGuQf

Ight, also like all right, can be used as an adjective (e.g., This food is ight) or adverb (We did ight).

Ight is informal in writing. It’s closely associated with black vernacular english, and so, use of it by people outside that community may be considered a form of cultural appropriation.

This is not meant to be a formal definition of ight like most terms we define on Dictionary.com, but is rather an informal word summary that hopefully touches upon the key aspects of the meaning and usage of ight that will help our users expand their word mastery.