What does meep mean?

Meep, an imitation of a high-pitched noise, often expresses a meek surprise or cutesy awkwardness. The word can also convey a great range of other emotions, from excitement to boredom.

Where does meep come from? 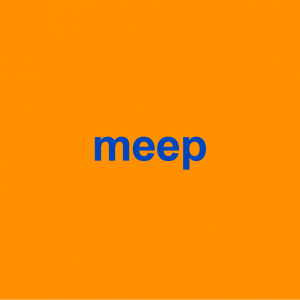 Recorded as early as the 1920s, meep first appeared as a word imitating a short, high-pitched sound, such as a small animal or alarm makes.

Meep is also the sole vocabulary of Beaker, the Muppet lab assistant who first appeared on The Muppet Show in 1977. He uses different intonations of meep or mee to express his thoughts and feelings, usually sadness or surprise, about Dr. Honeydew’s crazy antics.

In 2009, students at Danvers High School in Danvers, Mass., were using meep as a humorous nonsense word so frequently and disruptively that the school for a time banned it.

In the 2010s, the TV show American Horror Story featured the freak show character Meep, who only communicates in meeps, as an apparent homage to Beaker. Another homage seems to come from SpongeBob SquarePants, which, in 1999, first featured the tall, dorky Anchovies characters who mostly only say meep.

The Road Runner and Beaker both became icons in popular culture, which likely helped inspire meep‘s use to express any number of emotions. The Road Runner’s more taunting meep lends the term use as a cheerful interjection while Beaker’s more alarmed meep lends it to expressions of mild awkwardness.

In 2016, an app named Meep! launched. It reads news articles aloud to users, and the name is an apparent reference to the audio nature of the program.

In 2018, pop star Selena Gomez caused a meep-roar after saying meep in a video while getting her makeup done. We’re not really sure why the internet freaked out over it, but many did.

One boy, imitating Road Runner, bugged out his eyes and yelled, “Meep, meep!”
Thi Diem Thuy Le, The Gangster We Are All Looking For, 2011
A roadrunner! As cute in person as in the cartoon. Meep meep!
@Nnedi, August 5, 2018
Boo, Look! Fan-art of you tonight at da airport is so adorably cute! MEEP! MEEP! Kudos to my talented Babyz
@is_Layla, February 16, 2015
SEE MORE EXAMPLES

The expressive range of meep is impressive. Some use it to express an adorable smallness.

Meep can also express a lovable haplessness or meekness, like when Beaker or the Anchovies use it.

Occasionally, meep is used like bleep or beep as a playful euphemism for a swear word.

Meep still sees plenty of use in allusion to Beaker or the Road Runner, where meep meep can be a colloquial shorthand for “speed.”

This is not meant to be a formal definition of meep like most terms we define on Dictionary.com, but is rather an informal word summary that hopefully touches upon the key aspects of the meaning and usage of meep that will help our users expand their word mastery.