What does sploot mean?

Sploot is slang for the pose an animal, especially dogs, cats, and other four-legged pets, makes when it lies on its stomach with its hind legs stretched out back and flat. The term is especially associated with Welsh corgis and is used affectionately in the internet slang of DoggoLingo.

Where does sploot come from? 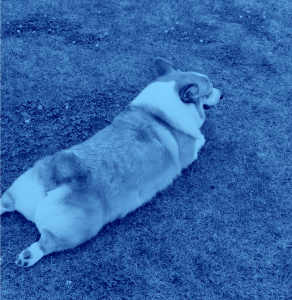 Sploot is part of a growing lexicon of DoggoLingo, which uses cute, deliberate misspellings and onomatopoeias like mlem, blep, smol, borf, and heckin to fawn over man’s best friend online—and the many, many pictures and videos we post of them.

While the exact origins of sploot are unclear, lexicographer Grant Barrett of the A Way with Words radio show has suggested that the term sploot may riff on the word splat to characterize the splat-like (flat, spread-out) appearance of a sploot pose. This wordplay mirrors other changes made to existing words in DoggoLingo, like the substitution of chonky for chunky.

Sploot is especially associated with corgis, a squat breed of dogs with very short legs. The use of sploot, as associated with pets, is evidenced by at least 2012. Similar terms for the same pose is frog-legging and frogging.

Prior to the popularity of DoggoLingo, sploot had occasionally been used as a slang term for … messy, wet bodily functions or excretions.

One commission done, another about done!

time to sploot for the night and chill.
@ElliShypotato, January 1, 2021
Sirid Kellermann of Stillwater says this is Lupe, a six-month-old Cardigan Welsh Corgi. She’s very energetic, but is also happy to “sploot” down anywhere, including the middle of the tennis court.
Reader Pet of the Week, Star Tribune, July 13, 2018

While sploot is closely connected to corgis, other animals, from pet turtles to polar bears at zoos, can be described as splooting. As the previous sentence illustrates, sploot can be a noun for the pose itself as well as a verb for the act of splooting.

Variations on sploot include side sploot (legs stretched to the side), half sploot (one leg stretched back), and reverse sploot (when the furry friend is lying on its back, not belly).

Due to the popularity of DoggoLingo terms, sploot is even sometimes used for, say, when humans “veg out” or “crash” on the couch after a long day!

My Mom and Dad make a big deal when I lay like this, I have no idea why. They call it a 'sploot' or some such thing.#Corgi #puppy #dogsoftwitter #Dog #doggy #doggo pic.twitter.com/RniJWYFMY0

I do the corgi sploot because I'm round and squishy. Come pet me!! 😘 #GuineaPigSploot pic.twitter.com/M4fLw0RiBn

I hav gone,, full sploot pic.twitter.com/RkOTgeK7Re

While some animals sploot to stretch or keep cool, veterinarians caution that in some instances, especially for large dogs, splooting may be a sign of hip dysplasia and need examination.

This is not meant to be a formal definition of sploot like most terms we define on Dictionary.com, but is rather an informal word summary that hopefully touches upon the key aspects of the meaning and usage of sploot that will help our users expand their word mastery.