Feedback
The Chronic
the D

What does the clap mean?

The clap is a slang term for a venereal disease, typically gonorrhea.

Where does the clap come from? 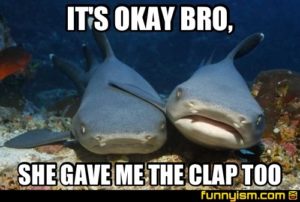 The clap is a very old slang term for a sexually transmitted disease (STD). It is said to come from the 13th-century French clapoire, or clapier in Modern French, meaning “rabbit hutch.” And rabbits, well, screw like rabbits.

Clapoire was extended as a term for “brothel,” where one might contract an STD, lending clapoire as a term for such an illness or the sores that come with it. 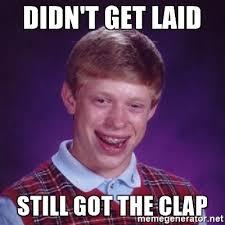 Clapoire is found in English as clap by the 1560s. Some people say it came from an (un-evidenced) medieval practice of clapping one’s genitalia with the hands or another object to reduce the pain of swelling and somehow cure the disease. Uh, OK. The clap then became commonly associated with US soldiers contracting STDs overseas during World Wars I and II. 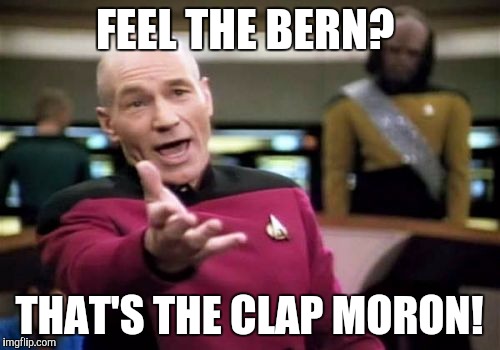 By the early 17th century, clap could also used as a verb for giving someone a venereal disease (e.g. He clapped his late wife). This sense of the word largely dropped out by the 20th century.

In contemporary English, the clap most commonly refers to gonorrhea, but it can also be used to describe almost any STD that makes your nether regions burn.

Examples of the clap

Gonorrhea, also referred to by the slang term "the clap," affects both men and women, and can cause infections in the genitals, rectum and throat.
Cari Nirenberg, LiveScience, July, 2018
When you’re sent on an urgent arrest enquiry 05:00 on your last #NightShift only to get in the address, not find the baddy, but find his cannabis grow instead 🤦🏻‍♂️ About as welcome as a dose of the clap! / #Police #FML #SoTired 😭
@BigFootedRozzer, August, 2018

Who uses the clap?

The clap is typically used with the definite article, the. It usually references gonorrhea, the second most common STD in the US, behind chlamydia.

The clap generally describes sexual promiscuity and can have a humorous, old-time-y-sounding force. As the clap is a slang term, it’s unlikely your doctor will tell you “you’ve got the clap”—they’ll more likely call it gonorrhea, give you antibiotics, and tell you to practice safe sex.

But, when you call your ex to let them know you’ve tested positive for an STD, you may want to call it the clap to soften the blow.

Victoria’s Secret is that she has the clap

This is not meant to be a formal definition of the clap like most terms we define on Dictionary.com, but is rather an informal word summary that hopefully touches upon the key aspects of the meaning and usage of the clap that will help our users expand their word mastery.

The Chronic
the D
Home / Words / Slang / the clap