Feedback
this is why I’m br...
Throwback Thursday

What does throuple mean?

A throuple is an intimate consensual relationship that involves three people.

Where does throuple come from? 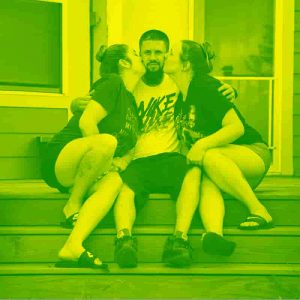 A blend of the words three and couple, a throuple is a polyamorous relationship also sometimes called a triad, ménage à trois, or, for a bonus blend, threelationship.

Evidence for throuple comes as early as 1994 in an internet Usenet discussion of non-traditional relationships. Throuple saw a smattering of uses online in the 2000s, but it was in 2014 that Stephen Colbert popularized the term on his TV show The Colbert Report in a story on a lesbian throuple‘s wedding.

In 2017, the show RuPaul’s Drag Race brought further attention to the term throuple when the contestant Derrick Barry discussed his throuple with an artist and fellow drag queen. A throuple also appeared in in the 2018 Netflix show Insatiable.

The word throuple was thrust back into the spotlight with the hit 2020 Netflix documentary Tiger King. The show features Joe Exotic, a notorious and eccentric animal park operator who was unofficially married to two men. This relationship has been popularly referred to as a throuple.

Next Monday #RedTableTalk is discussing the topic of polyamory. We'll be joined by a polyamorous throuple who will share their journey and explain why being a trio works for them. pic.twitter.com/JU3UGQXHp1

People may also playfully or facetiously use throuple for a trio of people, such as close friends.

Destiny added Carly to this call and one of the first things she said was “worlds best throuple.”

This is not meant to be a formal definition of throuple like most terms we define on Dictionary.com, but is rather an informal word summary that hopefully touches upon the key aspects of the meaning and usage of throuple that will help our users expand their word mastery.