What does positionality mean?

Positionality is the social and political context that creates your identity in terms of race, class, gender, sexuality, and ability status. Positionality also describes how your identity influences, and potentially biases, your understanding of and outlook on the world.

Where does positionality come from? 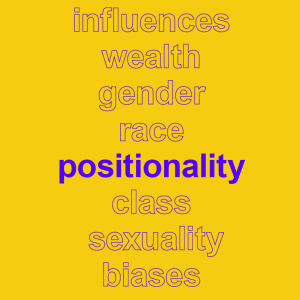 The term positionality first appears in epistemology, a branch of philosophy that studies how we know what we know. When it was first used in the mid-1920s, positionality wasn’t describing social and political forces, but simply where things are in space in relation to other things—the nature of their position.

During progressive movements in the 1960s, sociologists, anthropologists, and other social scientists started to wonder if there was such a thing as objectively observing a phenomenon (i.e., without being influenced by your own background). For example, if you’re an educated white man from Connecticut studying midwifery in sub-Saharan Africa, how might your identity and privilege—your social position— impact your research? That is the crux of positionality.

Positionality was applied to gender and sexuality in a 1988 article by philosopher Linda Alcoff called “Cultural Feminism versus Post-structuralism: The Identity Crisis in Feminist Theory.” It’s not really a beach read, but to summarize: She was trying to figure out how feminists could understand women, broadly speaking, when it seems almost everything we know about women comes from a male context. In other words, she investigates how a patriarchal worldview creates blinders when we try to come up with “true” things about gender.

Alcoff further argued that one’s position as a woman, queer person, straight person, etc., isn’t inherent to us but rather it is created by social and political forces that are constantly changing. Here’s a crash course in that concept if you want to learn more:

Even though gender isn’t an innate, stable characteristic of a person, it still exists and is politically relevant and consequential. Positionality asks people to understand and describe how gender and other identity markers inform how we see the world around us.

When I hold my black cis sisters accountable, as a black trans woman, I acknowledge positionality in a nuanced way.
Raquel Willis, The Root, March, 2017
I am genderqueer...This is the only gender identity that has ever felt right to me. I am also white, and a PhD. My positionalities as such are important to name as I pen this – and really, as I move through my every day.
Dana Stachowiak, The Educator Collaborative, July, 2017 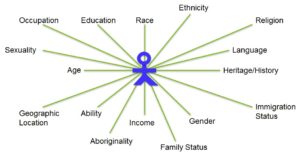 Positionality is a term widely used by feminist and queer theorists in academic spaces.

Researchers who rely on qualitative research like anthropologists, social scientists, and psychologists think a lot about their own positionality in something called a reflexivity or positionality statement. These are often included in published papers and are reflections on how the researcher’s positionality shapes their thinking and research. Here’s a how-to for those interested.

Social workers may use positionality to think about how their own identity impacts how they work with clients of different backgrounds then their own:

In the 2010s, positionality started spreading out of the academy and into more progressive, queer-identified, feminist media. For instance, in a 2018 music review for Autostraddle, an online community of queer women, writer Abeni Jones writes that artist “Mama Alto continues this [countercultural] tradition, weaving it with her experience and positionality as an Australian trans femme of color, and the results are beyond beautiful.”

Positionality is also used in the context of race and can be found in the “woke-r” corners of the internet and popular discussion.

If your able body, educated or financial stable, you have some privilege. However your positionality of being white and male affords you a lot privileges POC do not have!!

This is not meant to be a formal definition of positionality like most terms we define on Dictionary.com, but is rather an informal word summary that hopefully touches upon the key aspects of the meaning and usage of positionality that will help our users expand their word mastery.