What does voluntold mean?

“Attendance at the fundraiser is completely voluntary, but you’re strongly advised to attend.” “I need a volunteer. How about you?” “I already told everyone you’d be happy to help clean up.” If you’ve been told to volunteer with any such utterances, you’ve just been voluntold. That’s when you’ve been informed that volunteering isn’t so voluntary after all.

Kilroy was here, Whiskey Tango Foxtrot, Murphy's Law, yut, on the clock, no rest for the wicked, spare time

Where does voluntold come from? 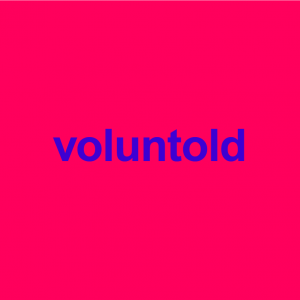 Being volunteered for something is already sarcastic, as volunteering is so supposed to be done of one’s own will. Voluntold ups the irony by combining volunteer with told, as in being told what to do.

Voluntold is widely associated with the military and may indeed have its origins in military slang. Embrace the Suck, a 2017 book of military slang, suggests that soldiers may have been saying it since the 1970s, but it seems voluntold really caught on in the 2000s. In a 2004 interview with KoreAm Journal, a soldier noted that some volunteered for their assignments while others were voluntold. A 2014 Business Insider article listed voluntold as a word that “only military people will know.”

For all these military connections, voluntold started to reach mainstream culture in the early 1990s. A forum post from 1992 discusses members of the Society for Creative Anachronism (think Renaissance Fairs) being voluntold to work on a book project. The military and Ren Fair worlds seem pretty far apart, but who knows? Maybe some of those jousters used to be lance corporals. (Rimshot, please.) Regardless, voluntold seems to have really hit its stride in the 2010s, when Google searches for the term began trending steadily upwards.

Some of my friends were PhD chemists who - sadly - were voluntold to be on the Roadkill Posse, removing dead animals to reduce the vulture population. One friend pulled a dead gator from a dumpster (HOW DID IT GET IN THERE?!) when its leg ripped off. He yelled, THAT'S IT, I QUIT!
@DrPhiltill, August 29, 2018
The group was founded in 2017 by a diverse group of women. Coach Anaslaysia (also known as Athena Mrozik) moved to the area from Chicago, bringing with her years of derby experience. She found the group online. They were newly formed, sought a coach, and the rest is history...“Before I knew it, I was ‘volun-told’ that I was going to be the president of the league,” Mrozik remembered with a laugh.
Jessica Weston, The Daily Independent, August 10, 2018
volunteered (/was voluntold) for a 4 hour shift making protective face shields at work and now my hands are burned to hell. LOVE THIS FOR ME.
@Rad_Braybury, July 29, 2020
SEE MORE EXAMPLES

It turns out soldiers aren’t the only ones who get voluntold to do stuff. The word has spread into churches, offices, and even volunteer groups when someone needs to express irritation at the “illusion of choice.” We guess that even when you choose to volunteer, you can still get bossed around. Being voluntold is apparently common enough in churches that it’s listed, tongue-in-cheek, in the 2011 book Stuff Christians Like.

Some bosses strongly recommend (ahem) employees volunteer for projects and events outside normal hours, hinting that not showing up will reflect poorly on the employee. Fast Company and Colonial Life have both commented on this phenomenon of workers being voluntold to do work off-hours. In this sense, voluntold has the sense of “being pressured.”

The present and active form of the verb, voluntell, is sometimes used, but much less frequently than voluntold. Maybe that’s because most of us are a lot more likely to get voluntold than admit voluntelling somebody. A slang synonym for voluntold is mandateer, or mandatory volunteering.

This is not meant to be a formal definition of voluntold like most terms we define on Dictionary.com, but is rather an informal word summary that hopefully touches upon the key aspects of the meaning and usage of voluntold that will help our users expand their word mastery.