Fool me once, shame on you. Fool me twice, and I’ll willingly post all my personal information on Facebook. To be Zuckered is to get tricked by Mark Zuckerberg–or more specifically, by his social media company, Facebook–for either financial gain or at the expense of your personal information.

Where does Zuckered come from? 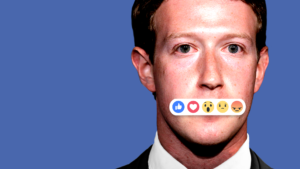 Zuckered is a punny blend of suckered (“conned”) and the last name of Facebook CEO, Mark Zuckerberg. The exact meaning of the term has varied, but central to it is being tricked or conned in some way, either by Facebook or by  Zuckerberg himself. You may get conned out of an idea, or for money.

When you take an idea to a developer and they delay you to build their own version, you've been zuckered. Don't be a zorry zucker.

Zuckered took off after the release of The Social Network in 2010. The film, about the creation of Facebook, focuses on Zuckerberg’s relationships with Eduardo Saverin (a Facebook cofounder) and Cameron and Tyler Winklevoss (the twins who launched an early competitor), all of whom sued Zuckerberg over issues relating to Facebook.

I love the Winklevoss twins!! Lol doing pistachio commercials since Mark Zuckerburg suckered them out of billions!

Around 2010, Zuckered was being used to refer to claiming someone else’s idea as your own–a plain reference to Zuckerberg allegedly stealing the idea for Facebook from the Winkelvoss brothers.

But even then, Zuckered was already being used in reference to Facebook’s data privacy issues, which notably hounded the company in the late 2010s.

In May 2012, Zuckered reappeared after a disastrous plunge of Facebook stock following the revelation that Facebook misled investors.

In April 2018, Mark Zuckerberg made headlines once again after he testified before Congress concerning Facebook’s role in the Cambridge Analytical scandal. During his testimony, which opened with an apology about “mistakes” about privacy and the prevalence of fake news  on his site, Zuckerberg stated that Facebook does not share users’ data with other companies. In fact, Zuckerberg publicly spent much of 2018 apologizing for supposedly unintended privacy leaks involving Facebook.

However, The New York Times revealed that Facebook had in fact shared data with over 150 companies, including Microsoft and Amazon. To many, it appeared Mark had Zuckered everyone yet again.

When it rains it pours, am I right, Zuckerberg? *feed immediately flooded with ads for umbrellas* Damn it! I've been Zuckered again!!
@itsshoogs_again, April 2018
Wow. The Oculus Rift deal was only $400mil in cash and the rest is Facebook shares. What a terrible terrible deal! #zuckered
@KimHuston, March 2014 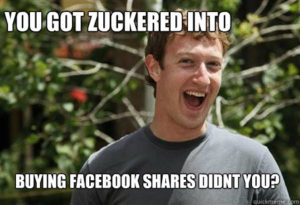 Zuckered is most often seen in the construction, to get or be Zuckered. Fittingly, it’s most commonly used on social media.

<me> “My identity was stolen, I’d like to replace my license and health card.”

Looks like millions of people got #Zucked and #Zuckered !

And, in rough times, getting Zuckered can describe losing your investment money when Facebook’s stock plunges in response to Zuckerberg’s antics.

‘How we all got Zuckered’… fab extract from #Zucked by @Moonalice in today’s @DailyMailUK @HarperNonFic pic.twitter.com/ugmlEUxTTu

This is not meant to be a formal definition of Zuckered like most terms we define on Dictionary.com, but is rather an informal word summary that hopefully touches upon the key aspects of the meaning and usage of Zuckered that will help our users expand their word mastery.