What does decacorn mean?

A decacorn is a financial term for a relatively new company that is worth at least $10 billion.

Where does decacorn come from? 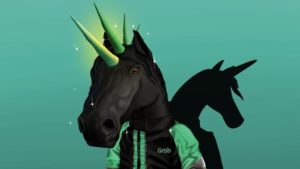 By 2015, such unicorns had become more more common in the business world. So, a 2015 Business Insider article described companies valued at over $10 billion as decacorns, what Lee previously dubbed “super unicorns.” The article identified Airbnb, Uber, and Pinterest as decacorns, among others.

While the uni– in unicorn comes from the Latin-based prefix uni- (“one”), decacorn features the prefix deca–, ultimately from the Greek word for “ten.” FYI, there are no decacorns in myth (horses with ten horns).

Companies valued at over $100 billion, like Google, Microsoft, and Amazon, are called hectocorns (hecto-, “hundred”), JSYK.

The value of the company formerly known as Google rose by one Uber (or 5 decacorns) in the last hour
@mhelft, October, 2015

Indonesian ride-hailing service Go-Jek’s value was estimated at $10 billion by a U.S. market intelligence company, putting it in the ranks of startups called decacorns. 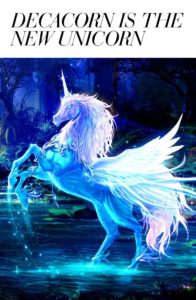 The term decacorn is principally found in tech and business media and discussions. As noted, it often refers to a relatively new, tech-based startup company that is privately owned (i.e., not (yet) publicly traded).

As of 2019, the platform CB Insights valued 17 companies as decacorns with China’s ByteDance (who owns TikTok) as the “fattest” decacorn at a $75 billion evaluation. Other notable decacorns include Airbnb ($29.3 billion) and Fortnite creator Epic Games ($15 billion).

Southeast Asian media is ablaze with discussion of the latest “decacorn” https://t.co/xhn8CWvsDx

Lyft and other money-losing Decacorn IPOs – in pictures. @WSJ – https://t.co/lIAYGL6dzZ

This is not meant to be a formal definition of decacorn like most terms we define on Dictionary.com, but is rather an informal word summary that hopefully touches upon the key aspects of the meaning and usage of decacorn that will help our users expand their word mastery.