Where does gråtrunka come from? 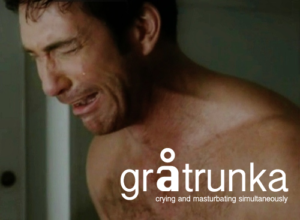 I would like to ask the Swedish people why there is such a word as gråtrunka. I am really curious. WHY

Gråtrunka is associated with a pathetic, sad kind of sexual frustration. In October 2009, quite the vivid definition of gråtrunka was posted on the Swedish version of Urban Dictionary, Slangopedia: “to sit at home in a state of depression, introversion and anxiety while at the same time jerking off and shivering in their own self-pity.” 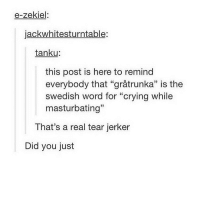 Gråtrunka is a vulgar but humorous slang word. It’s used by Swedish speakers in a sort of tongue-in-cheek way. It has strong associations with sexual rejection and, more disparagingly, being wimpy in an emo manner.

People who don’t speak Swedish are nonetheless attracted to the novelty of gråtrunka as a single word. They may reference gråtrunka as an example of the ineffable beauty and descriptive power of the Swedish language.

This is not meant to be a formal definition of gråtrunka like most terms we define on Dictionary.com, but is rather an informal word summary that hopefully touches upon the key aspects of the meaning and usage of gråtrunka that will help our users expand their word mastery.