What does puto mean?

You don’t want to just go around saying this. Puto is the masculine form of the multi-functional Spanish puta, meaning “prostitute.” It’s used as a slur against people who are gay and an insult to anyone perceived as weak or contemptible.

Where does puto come from? 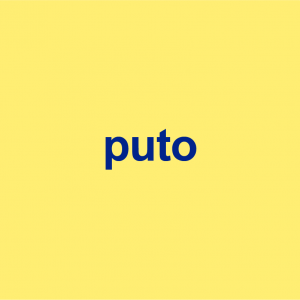 The origin of the word puto is uncertain, according to the Royal Spanish Academy. It’s recorded by the early 17th century, though, like its sister word puta, is likely much older. The root may be from Latin words for “girl” or “bad-smelling.”

Spanish, a Romance language, has grammatical gender represented in the endings of words, and so a female prostitute is puta in Spanish while a male one is puto. Male prostitution has been historically associated with gay activity, which is likely how puto became a homophobic slur along the lines of gay or fag, though it may also have the force of bitch. Also like the English gay and fag, puto can demean a man as cowardly due to homophobic stereotypes of gay men.

So there is supposed to be this hurricane thats gonna hit Louisiana tonight.
Lets all hope hell breaks lose and destroys the piece of shit ex who lives over there (:
Sending negative ass vibes yo way puto 😄

... everything is cringe you stupid uglyass maricon pendejo vete comer riata puto
@daniel_23000, September 4, 2018
Puto. You've heard the word. But do you know how bad it is? It's essentially Spanish for faggot ... And it flies regularly on television's Jose Luis Sin Censura show, a sort of Mexican Jerry Springer (that last part of the title means uncensored) that airs locally on KRCA (estrellaTV).
Dennis Romero, LA Weekly, June 21, 2012
You don’t know my food puto get off my TL
@wizardfgc, August 6, 2020
SEE MORE EXAMPLES

Puto, like puta, can be used as a general intensifier à la the English fuck. It’s particularly common Mexico and Chicano communities, especially at fútbol matches. There, fans may chant puto to distract the opposing team’s goalkeeper. The vulgar chant is a bit of a play on words, as missing a goal in Spanish is dejar que se la metieran, or “to let someone stick it in.” If they do that, well, then they must be a puto, at least in the minds of macho muchachos.

Calling someone a puto, whether in a Spanish or mixed English–Spanish contexts, is very offensive. It is like calling someone a faggot. Using puto to call someone “weak” is also offensive, because it denigrates people who are gay by comparison. This pejorative connotation is why members of the Spanish-speaking gay community in the United States and Mexico have advocated for people to stop using the word, especially at soccer games.

As with many English swear words (cf. bitch or fucker), puto can be used playfully and affectionately among  close friends, but in a way that is very mindful of its homophobic valences.

This is not meant to be a formal definition of puto like most terms we define on Dictionary.com, but is rather an informal word summary that hopefully touches upon the key aspects of the meaning and usage of puto that will help our users expand their word mastery.