Feedback
Previous Is "Cheesecake" Really A Cake? Next Where Does The Name "Saturday" Come From?

Along with presents and beautifully decorated trees, the holidays deliver the blessing of movies that are part of many family traditions! From Miracle on 34th Street to Elf, these are the movies we watch over and over again every holiday season. (Ready for that Christmas Story marathon? We are!)

These beloved classics are chockablock with dialogue we have heard so many times … but do we really know what some of our favorite quotes mean or where they come from?

We’ve rounded up some of the most colorful vocabulary from our favorite holiday movies. Next time you watch these films, keep an ear out for some of these words and expressions. And if you’re interested in playing along while you watch your favorites, check out our Bingo card full of these classic words and phrases. 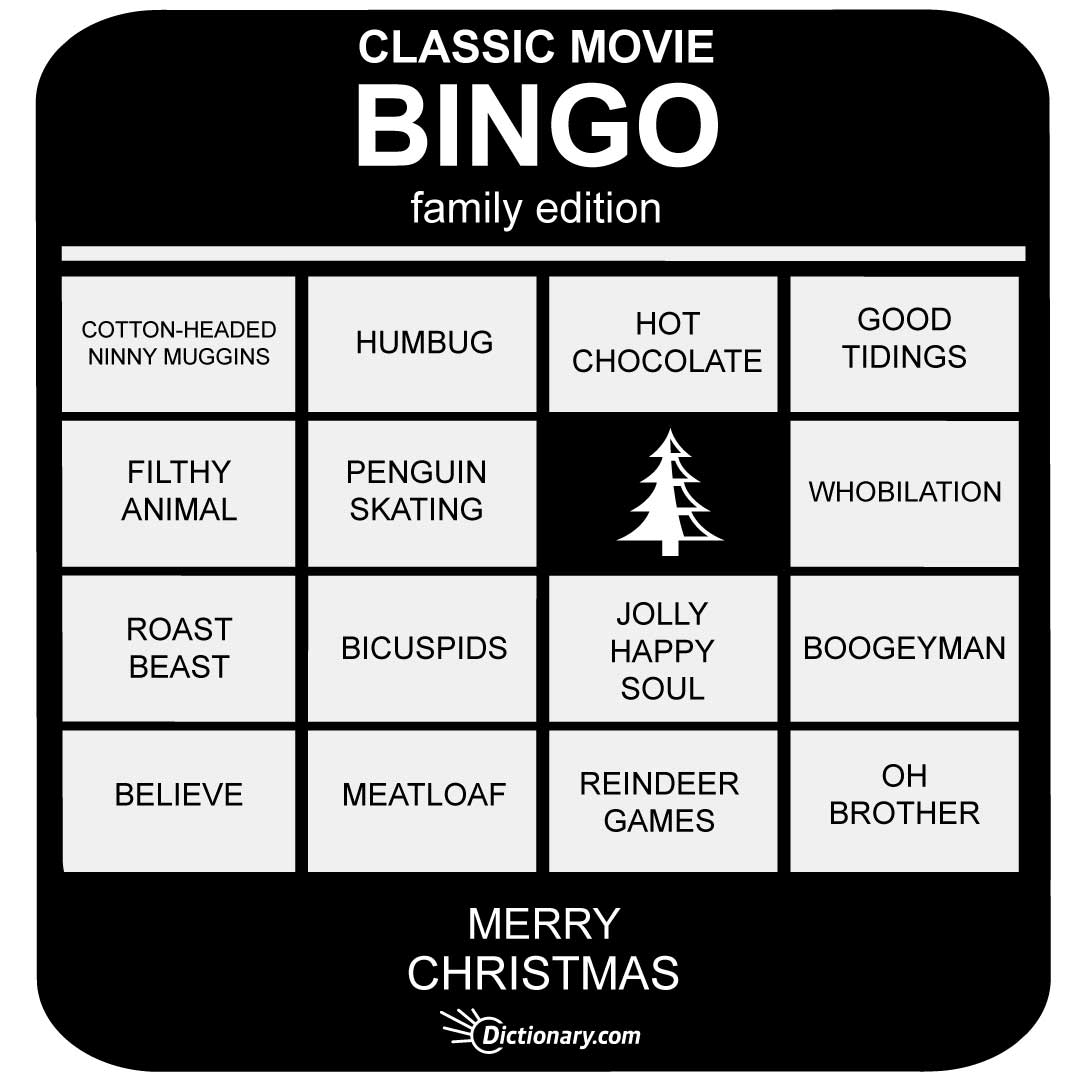 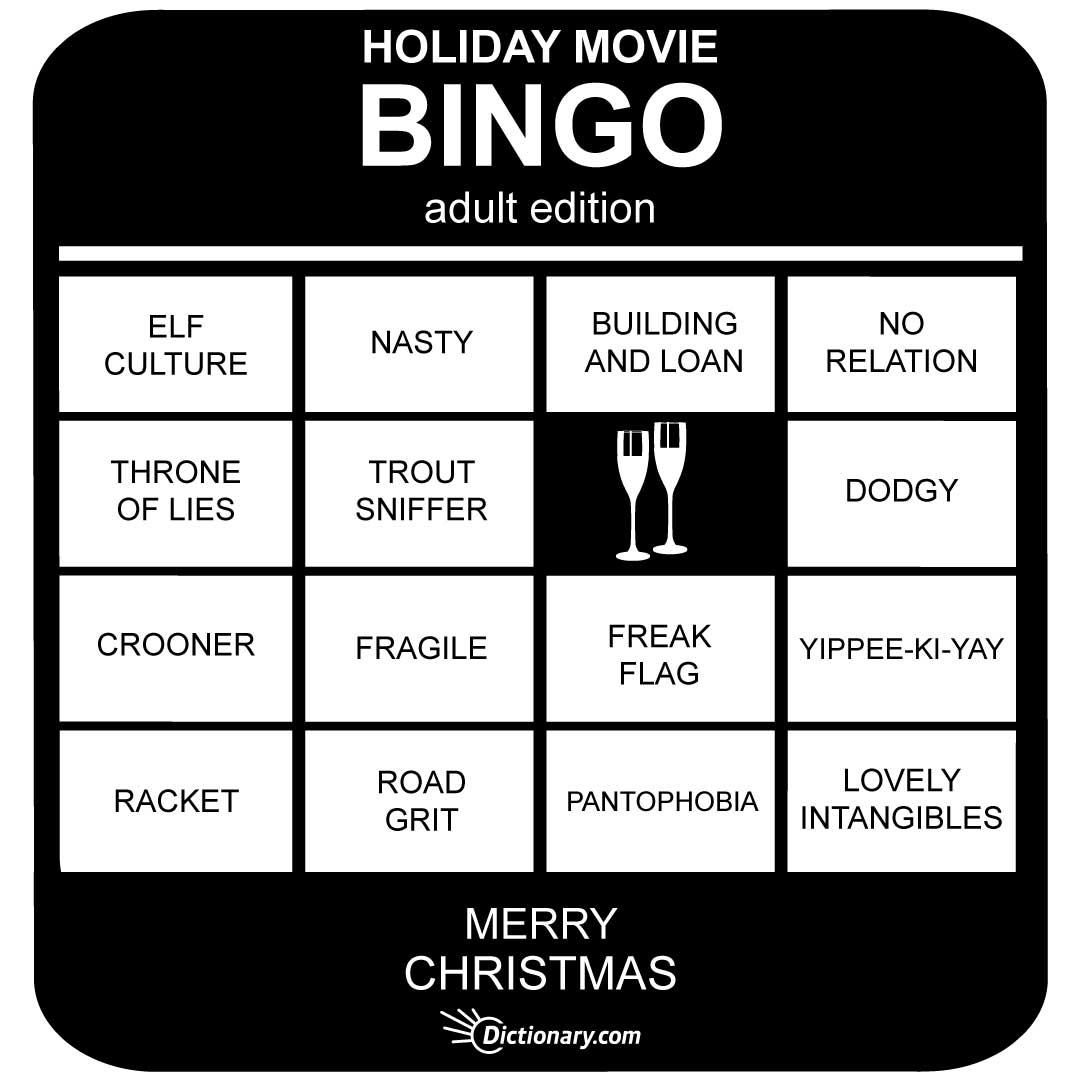 Elf (2003), starring Will Farrell as Buddy, is the touching tale of a man who thinks he’s an elf. One of the most charming things about Buddy is his whimsical way of seeing the world. But life isn’t always so easy for Buddy in the North Pole. He’s hopeless at making toys, calling himself a “cotton-headed ninny-muggins,” much to the shock of the other elves in Santa’s Workshop. Cotton-headed ninny-muggins is a riff on a compound insult, like the kind Shakespeare was so fond of (which is why it shocks the elves so much). Cotton-headed means that Buddy thinks his brains are made of cotton. Ninny is a word for a fool or simpleton. Muggins is British slang for a foolish or gullible person.

Taken together, when poor Buddy calls himself a cotton-headed ninny-muggins, he’s saying he thinks he’s a simple fool.

In the book A Christmas Carol by Charles Dickens and its countless film adaptations (our favorite is the 2000 release, The Muppet’s Christmas Carol), the miserly Ebenezer Scrooge is famous for saying, “Bah, humbug.”Humbug is mid-18th century English slang of unknown origin but it means “deception” or “sham.” It’s used as an interjection to mean “Stuff and nonsense!”

So when Scrooge dismisses something with “Bah, humbug,” it’s his old-man way of saying it’s ridiculous.

The bad guy in the animated Nightmare Before Christmas (1993) is Oogie Boogie, or Mr. Oogie Boogie Man. He tries to take out Santa Claus (yikes). Oogie Boogie’s name is a play off the syllables in boogeyman, which is what he is.

Boogeyman is thought to come from the Middle English bogge, a word for “ghost” or “something frightening,” or from the German (bögge), meaning “goblin.” Stories of the boogeyman (sometimes spelled bogeyman) have been part of British folklore since the 1500s.

Dr. Seuss’s classic How the Grinch Stole Christmas has delighted children (and adults) since it was first published in 1957. There have been a number of film adaptations, including one starring Jim Carrey (2000) and Boris Karloff’s 1966 cartoon. The naughty Grinch steals all the Christmas goodies from the residents of Whoville, including their roast beast. Roast beast was made up by Dr. Seuss, but it’s a riff on a classic holiday dish—roast beef. Roast beef is an English dish that’s been served since at least the 1600s, particularly for Christmas. Traditionally, Americans, though, have eaten turkey or ham for Christmas.

Does this mean the Whos of Whoville are English? We leave that up to you to decide.

It’s a much more equitable way to help people get home loans than the greedy Mr. Potter would like.

Another heartwarming Christmas movie is Miracle on 34th Street (1947). In it, Kris Kringle works overtime to help people remember the true meaning of Christmas. It’s not about the presents or the decorations. It’s about, as Kringle puts it, “a frame of mind.”

When Gailey says that lovely intangibles are what is important, he’s referring to the spirit of Christmas, not all the presents and material things.

Love Actually (2003) is a touching, slightly raunchy romantic comedy that takes place right before Christmas. It follows 10 separate love stories that come together in the end. This British film has some English slang that might throw off an American viewer, including the lovely dodgy.

In the movie, Prime Minister David is in love with his assistant Natalie. She informs him that she lives on the “dodgy end” of Wandsworth (a borough of London).

The original meaning of dodgy was “tricky” or “difficult.” But since the 1960s, dodgy is also taken to mean “questionable” or “dubious.” So, when Natalie says she lives on the “dodgy end” of the neighborhood, she is referring to the fact that her part of town isn’t the nicest and perhaps a bit dangerous.

In the animated classic Rudolph, the Red-Nosed Reindeer (1964), Rudolph’s friend Hermey the Elf dreams of being a dentist. He talks about it several times throughout the film. He even goes so far as to say he is a dentist, before backtracking and saying, “Well, I want to be someday.” After all, they need dentists at the North Pole, too!

Hermey can’t help showing off his dentistry knowledge. He uses dentist lingo like bicuspids in the film. Bicuspid comes from the Latin meaning “having two sharp points.”

In dentistry, bicuspids, also known as premolars, are the teeth between your molars (in the back) and your canines (in the front), and they typically have … two points. Now you know what Hermey is talking about when he says he’s studying “molars and bicuspids and incisors.”

One of the most over-the-top, ridiculous, classic Christmas musicals is White Christmas (1954), starring Bing Crosby and Rosemary Clooney, both well-known singers of the era. The movie features the music of Irving Berlin. In it, Phil Davis (played by Danny Kaye) says to Crosby’s character, “That’s very funny. The crooner is now becoming the comic.”

Bing Crosby was a famous crooner, a name given to classic, sentimental male singers. The word comes from the verb croon, meaning “to sing in a low, smooth voice.” This meaning of croon has been in use since the late 1700s, but the heyday of crooners was the ’40s and ’50s—when this movie was made.

We recognize this next example might be controversial, but, like John McClane, we’re not afraid of a little conflict.Die Hard (1988) starring Bruce Willis is accepted in some quarters as a Christmas movie because it’s set during Christmas. The movie has a lot of notable quotables, including the classic “yippee-ki-yay.” One of our favorite moments is when the FBI agent introduces himself as Special Agent Johnson and his partner as Agent Johnson. Seeing the confusion on people’s faces, he clarifies: no relation. (It doesn’t really clear things up too much.)

According to the Oxford English Dictionary, using the phrase no relation as shorthand to indicate that two people aren’t family members (despite having the same last name) dates back to 1930.

While we are rolling out unpopular opinions, here’s another one: Home Alone II: Lost in New York (1992) is better than Home Alone (1990). In this sequel, Kevin McCallister (Macaulay Culkin) gets up to all kinds of hijinks in the Big Apple. But before his family loses track of him (again), his big brother Buzz calls him a “trout sniffer.” Buzz sucks.

But what even is a trout sniffer? Only Buzz can know the answer to that.

That said, it has a bit of a Shakespearian quality to it. Sniffing trout sounds gross and weird. The implication is that someone who would do that is lowly and strange. Trout sniffer also brings to mind the insult cakesniffer, which implies someone is too poor to afford cake to eat—they can only sniff it.

All Ralphie wants for Christmas in A Christmas Story (1983) is a Red Ryder BB gun. Throughout the film, the adults around him warn him off of a BB gun, because it’s dangerous and they think (altogether, now) he’ll shoot his eye out.

When Christmas Day finally arrives, Ralphie can barely contain his excitement as he opens his gifts. Adult Ralphie, the narrator of the film, says, “We plunged into the cornucopia quivering with desire and the ecstasy of unbridled avarice.”

Avarice is a fancy word for “greed.” Ecstasy is a word meaning “rapturous delight.” It comes from the Greek word for “entrancement, astonishment.”

Feeling overwhelmed and entranced while opening Christmas presents is a feeling we can all relate to, whether or not we are hoping for a Red Ryder BB gun.

Deck your vocabulary with these explanations for some of the most familiar holiday phrases that come out in winter.

Previous Is "Cheesecake" Really A Cake? Next Where Does The Name "Saturday" Come From?
RELATED POSTS