[ vahy-ruhs ]
/ ˈvaɪ rəs /
Save This Word!
See synonyms for virus on Thesaurus.com
This shows grade level based on the word's complexity.
noun, plural vi·rus·es.
an ultramicroscopic (20 to 300 nanometers in diameter), metabolically inert, infectious agent that replicates only within the cells of living hosts, mainly bacteria, plants, and animals: composed of an RNA or DNA core, a protein coat, and, in more complex types, a surrounding envelope.
a viral disease: He stayed home sick with a virus for nearly two weeks.
a corrupting influence on morals or the intellect; poison.
a segment of self-replicating code planted illegally in a computer program, often to damage or shut down a system or network.
QUIZ
WILL YOU SAIL OR STUMBLE ON THESE GRAMMAR QUESTIONS?
Smoothly step over to these common grammar mistakes that trip many people up. Good luck!
Question 1 of 7
Fill in the blank: I can’t figure out _____ gave me this gift.
who
whom
TAKE THE QUIZ TO FIND OUT

OTHER WORDS FROM virus

What is a virus?

A virus is an ultramicroscopic agent that can only reproduce in living cells and is spread through infection. Many viruses cause diseases as part of their reproduction process.

A virus can’t reproduce on its own. Instead, it will infect a living cell and force it to make more copies of the virus. When the virus does this, it stops the cell from whatever it was doing before and, eventually, kills the cell.

Viruses are infectious, meaning they often cause symptoms that allow fluids with copies of the virus to spread to other organisms. For example, if you have the flu and cough on another person, your virus-containing saliva and mucus will enter the other person’s body and allow the virus to infect their cells.

Because viruses remain inside living cells, it is often impossible to kill the virus without also killing the cell. Usually, your immune system is the only thing that can safely fight a virus.

Why is virus important?

Viruses are responsible for some of the most deadly, incurable diseases we have today. In 2019, a new type of coronavirus (a family of viruses that often cause respiratory illnesses) was the cause of a deadly disease known COVID-19 (short for coronavirus disease 2019), which became a worldwide pandemic.

Viruses have also been responsible for other serious diseases, such as HIV (short for human immunodeficiency virus), that causes AIDS, a disease in which the immune system gradually breaks down and often leads to cancer.

Because viruses are so hard to kill and some can make you very sick, we try to prevent viruses from infecting us in the first place. Washing your hands, not breathing on people, and staying home when you are sick with a virus all help prevent the virus from spreading.

Vaccines are used to train your immune system to better fight specific viruses. Sometimes, antiviral medications can interfere with the virus’s ability to take over a cell or treat the symptoms of the virus rather than attack the virus itself.

The word virus is also used to describe malicious computer code that is designed to harm or infect computers in a similar way to how a biological virus infects living things.

What are real-life examples of virus?

This photo depicts an image of a virus. 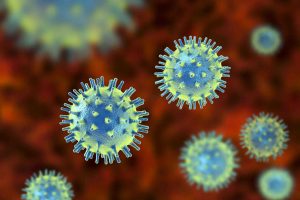 Viruses cause many deadly diseases so people are never fans of them.

Q: Which antibiotic should you take to treat COVID at home?

Antibiotics kill bacteria; COVID is caused by a virus

What other words are related to virus?

Because viruses are hard to kill, we try to prevent them from spreading in the first place.

How to use virus in a sentence

virus
/ (ˈvaɪrəs) /
noun plural -ruses
any of a group of submicroscopic entities consisting of a single nucleic acid chain surrounded by a protein coat and capable of replication only within the cells of living organisms: many are pathogenic
informal a disease caused by a virus
any corrupting or infecting influence
computing an unauthorized program that inserts itself into a computer system and then propagates itself to other computers via networks or disks; when activated it interferes with the operation of the computer

virus
[ vī′rəs ]
Plural viruses
Any of various extremely small, often disease-causing agents consisting of a particle (the virion), containing a segment of RNA or DNA within a protein coat known as a capsid. Viruses are not technically considered living organisms because they are devoid of biological processes (such as metabolism and respiration) and cannot reproduce on their own but require a living cell (of a plant, animal, or bacterium) to make more viruses. Viruses reproduce first either by injecting their genetic material into the host cell or by fully entering the cell and shedding their protein coat. The genetic material may then be incorporated into the cell's own genome or remain in the cytoplasm. Eventually the viral genes instruct the cell to produce new viruses, which often cause the cell to die upon their exit. Rather than being primordial forms of life, viruses probably evolved from rogue pieces of cellular nucleic acids. The common cold, influenza, chickenpox, smallpox, measles, mumps, yellow fever, hemorrhagic fevers, and some cancers are among the diseases caused by viruses.
Computer Science A computer program that duplicates itself in a manner that is harmful to normal computer use. Most viruses work by attaching themselves to another program. The amount of damage varies; viruses may erase all data or do nothing but reproduce themselves.

Other words from virus

Cultural definitions for virus (1 of 3)

Microorganisms consisting of DNA and RNA molecules wrapped in a protective coating of proteins. Viruses are the most primitive form of life. They depend on other living cells for their reproduction and growth. (See under “Medicine and Health.”)

Cultural definitions for virus (2 of 3)

A minute organism that consists of a core of nucleic acid surrounded by protein. Viruses, which are so small that a special kind of microscope is needed to view them, can grow and reproduce only inside living cells. (See under “Life Sciences.”)

Cultural definitions for virus (3 of 3)