See the most commonly confused word associated with dna
Save This Word!
See synonyms for RNA on Thesaurus.com
Genetics.
ribonucleic acid: any of a class of single-stranded molecules transcribed from DNA in the cell nucleus or in the mitochondrion or chloroplast, containing along the strand a linear sequence of nucleotide bases that is complementary to the DNA strand from which it is transcribed: the composition of the RNA molecule is identical with that of DNA except for the substitution of the sugar ribose for deoxyribose and the substitution of the nucleotide base uracil for thymine.

Click for a side-by-side comparison of meanings. Use the word comparison feature to learn the differences between similar and commonly confused words.
QUIZ
WILL YOU SAIL OR STUMBLE ON THESE GRAMMAR QUESTIONS?
Smoothly step over to these common grammar mistakes that trip many people up. Good luck!
Question 1 of 7
Fill in the blank: I can’t figure out _____ gave me this gift.
who
whom
TAKE THE QUIZ TO FIND OUT
Compare messenger RNA, ribosomal RNA, transfer RNA.

RNA is a large, complex molecule (macromolecule) that functions alongside DNA to help cells make proteins.

DNA is a macromolecule that allows cells to function and carries the genetic code that determines the traits of a living organism. Among other things, RNA works with DNA to make proteins, which are required for many essential functions within living things. During this process, RNA acts as a kind of copy of the DNA that carries its genetic information outside of the cell nucleus.

RNA also carries the genetic information of many viruses.

RNA stands for ribonucleic acid. Like DNA, RNA is a nucleic acid, which means it is made of a phosphate, a sugar, and nitrogen bases.

RNA consists of one long strand of sugars and phosphates and the nitrogen bases, which form base pairs. The result resembles a ladder with just one side. By comparison, DNA has two long strands of sugars and phosphates, with the base pairs between them, making it look like a spiraled ladder (a double helix). RNA has three of the same nitrogen bases found in DNA—adenine (A), guanine (G), and cytosine (C). Instead of thymine (T), though, RNA has uracil (U).

DNA contains the instructions that cells need to make proteins. An enzyme in the cell nucleus, known as RNA polymerase, unspirals the DNA and breaks the ladder in half down the middle. The enzyme then reads the nitrogen bases (the rungs of the ladder) and makes RNA in a process known as transcription. The RNA sequence matches the sequence from the DNA strand except that in RNA, adenine is paired with uracil instead of thymine, and the sugar deoxyribose is substituted with ribose.

There are three major kinds of RNA. Messenger RNA (mRNA) is created from a DNA template in the nucleus and then carries the genetic code to structures called ribosomes in the cytoplasm (the middle layer of the cell between the nucleus and the membrane), where it specifies the amino acid sequence for protein synthesis. Ribosomal RNA (rRNA) is a part of ribosomes that allows messenger RNA to function. Transfer RNA (tRNA) transports specific amino acids to ribosomes during protein synthesis.

We took a microscopic look at the differences between RNA, mRNA, and DNA, and their vital roles. Read all about it here!

Why is RNA important?

DNA and RNA are ancient, but their discovery was relatively recent. In 1869, chemist Friedrich Miescher documented a kind of molecule that had never been studied before—nucleic acid. It wasn’t until around the 1930s that the term DNA began to be used, with RNA following in the 1940s. In the 1950s, the work of biophysicist Rosalind Franklin and biologists James Watson and Francis Crick revealed DNA’s double helix structure. The function of RNA began to be further understood during the 1950s and 60s as scientists began to understand the role of messenger RNA.

This understanding is still developing. Until quite recently, RNA’s role was thought to be largely limited to assisting with protein synthesis in its forms as messenger RNA, transfer RNA, and ribosomal RNA. However, scientists are continuing to discover new types of RNA and more functions that RNA performs in the body. For example, recent discoveries suggest that there are several types of RNA that regulate how many proteins the ribosomes produce.

Some viruses completely lack DNA and instead their genetic information is contained entirely within RNA. COVID-19 is this type of virus, known as an RNA virus. RNA viruses are more adaptable and are much more likely to mutate than DNA viruses.

What are real-life examples of RNA?

Unlike DNA, which takes the form of a double helix, RNA consists of a single strand, as pictured in this illustration. 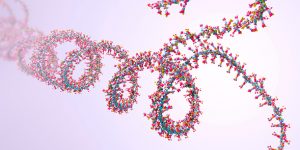 Most biology students learn about RNA alongside DNA. Our understanding of the role of RNA within the cell is still expanding.

A new single cell #RNA and BCR sequencing study of human tonsils improves our understanding of B cell maturation, providing an expansive resource for researchers to study B cell responses during #health and disease.

The messenger RNA technology that developed successful covid-19 vaccines could transform medicine. Next up: sickle cell, HIV, and malaria. https://t.co/xWbyr9cplh

What other words are related to RNA?

One of RNA’s main functions is using the information from DNA in the creation of proteins.

How to use RNA in a sentence

RNA
[ är′ĕn-ā′ ]
Short for ribonucleic acid. The nucleic acid that is used in key metabolic processes for all steps of protein synthesis in all living cells and carries the genetic information of many viruses. Unlike double-stranded DNA, RNA consists of a single strand of nucleotides, and it occurs in a variety of lengths and shapes. RNA also differs from DNA in having the pyrimidine base uracil instead of thymine and in having ribose instead of deoxyribose in its sugar-phosphate backbone. In eukaryotes, RNA is produced in the cell nucleus.♦ Messenger RNA is RNA that carries genetic information from the cell nucleus to the structures in the cytoplasm (known as ribosomes) where protein synthesis takes place.♦ Ribosomal RNA is the main structural component of the ribosome.♦ Transfer RNA is RNA that delivers the amino acids necessary for protein synthesis to the ribosomes. Compare DNA.
The American Heritage® Science Dictionary Copyright © 2011. Published by Houghton Mifflin Harcourt Publishing Company. All rights reserved.

One of a group of molecules similar in structure to a single strand of DNA. The function of RNA is to carry the information from DNA in the cell's nucleus into the body of the cell, to use the genetic code to assemble proteins, and to comprise part of the ribosomes that serve as the platform on which protein synthesis takes place.